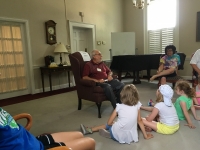 Isam Zaiem, a Muslim who lives in Westlake, has attended both Peace Villages to share his personal beliefs on peace and how the Islam religion speaks about peace.

Once again, Dover Congregational United Church of Christ held its Peace Village Day Camp the week of July 16 on the grounds of the church on Dover Center Road in Westlake. The children who attended the camp were from a variety of communities in the area who all had differing faith traditions or perhaps no faith traditions at all. The universal concept of peace is one that transcends all belief systems.

The children, who ranged in age from 6-15 years old, spent the mornings going to different stations to learn about the four main concepts of peace: Peace within Self, Peace with Others, Peace in our Culture and Peace with the Planet. They made projects, learned new songs, and put into action ways to demonstrate peace.

The afternoons were focused on community service. The older children went off-site for various projects: They went to Community Cares in North Ridgeville to do some landscaping. In addition, they worked at Med Wish, made no-sew blankets for sick children at Rainbow Babies and Children’s Hospital and created cat and dog toys for the ASPCA in Parma.

When asked what she enjoyed the most about her experience during the week, Amelia, 11, from North Olmsted stated, “I like making friends with people I didn’t know before.”  Thea, 8, from Cleveland Heights, had a favorite activity – peace meditation: "I liked it so much because it makes you feel super calm.”

Another camper, Finely, 10, from North Ridgeville said he liked “the nature hike – where we learned about peace with the earth.” One of his most favorite activities was going to Community Cares in North Ridgeville for a service project.

Then there was Marifer, 8, from Westlake. Her favorite part of the day was lunchtime “because you can listen and tell stories and laugh.”

The day I was there, during lunch, two tables of children were both vying for an adult volunteer to sit with them. After a game of rock, paper, scissors – Mr. Kurt, the popular volunteer, spent half of his time at the winning table and had dessert with the other. Good job keeping the peace, Mr. Kurt!

It takes a village to make this camp run efficiently. Director Cynthia Stuart enlisted the help of over 45 volunteers from the congregation. The volunteers assisted with preparing the church grounds, prepping materials for the many lessons and some also taught various classes throughout the week. Dover Congregational United Church of Christ has a very deep commitment to peace and social justice issues and so hosting this camp is second nature for them.

The camp's adult volunteers also came away with an appreciation for the experience. “It was nice to get a child’s perspective on peace," said Abby, 18, co-director of this year's Peace Village. "Their view of the world is pure – they truly believe peace is a possibility.”