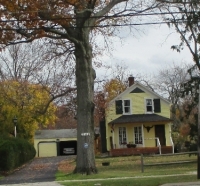 Elizabeth Hughes Cahoon built this house on Dover Center Road to be closer to the Cahoon sisters.

On Dover Center Road just south of the old Broadview Savings and Loan branch office (the current Citizens Bank building) is a small Victorian farmhouse. What is the story behind this house? Who lived there? Who built it?

Elizabeth Hughes grew up in a log cabin on the Ohio River in Cleves, Ohio. Her next door neighbors were Joel and Margaret Cahoon, living in their log cabin. As children growing up together, Joel and Margaret's son Tom Cahoon and Elizabeth played together and became good friends.

When the Cahoon family moved north to Dover Township, Elizabeth and Tom kept in contact through letters and visits. As young adults, they married in 1860, in the Hughes' log cabin, and moved to Cleveland. Tom and Elizabeth had a daughter they named Effie.

Elizabeth settled into domestic house keeping at 5217 Franklin Ave. in Cleveland. She became active in the Women’s Christian Temperance Union while raising their daughter, and Tom ventured into the lumber business and became a Cleveland City Councilman in the old Ward 10.

Elizabeth was a 50-year member of the Old Stone Church in Cleveland. She also attended the neighborhood church, Bethany Presbyterian, on the corner of Clinton and West 65th Street.

Effie married Dr. Clifton Ellis. When she was but 28 years old she caught tuberculosis and died in 1888. Tom died in 1907.

When Elizabeth died at age 84 in 1914, she willed monies to the WCTU and the Presbyterian Board of Relief (for disabled ministers) valued at $8,000. The Bethany church was given a second Cahoon property at 1872 W. 47th St. The proceeds of her Franklin Avenue home went to the Presbyterian home.

When Tom died, his sisters Lydia, Laura and Ida Cahoon offered Elizabeth a piece of land in the Baldwin apple orchard on Dover Center Road with the idea she could build a house and spend the summer and weekends with them. It was an easy walk from her new home across the valley bridge to the Cahoon house. Elizabeth agreed and built the house still standing at 415 Dover Center Road.

Each house in the village has a story. This is just one.

This house is for sale today.