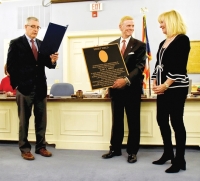 Gary Ebert shows the plaque to his wife, Pamela, as Mayor Paul Koomar reads the proclamation. Photo by Denny Wendell

Former Bay Village law director Gary Ebert was honored at the Dec. 17 Bay Village City Council meeting for his decades of service to the city. Mayor Paul Koomar read a lengthy proclamation detailing Ebert’s history in the city and love of baseball before revealing a plaque that will dedicate one of the city’s baseball fields in his honor. After the plaque installation this spring, a field located in Cahoon Memorial Park East will be known as Ebert Field.

“It’s dear to my heart,” Ebert said of the city to which he dedicated so much of his life. “I bleed blue. My heart’s here in Bay Village and always will be, and my whole family’s as well.”