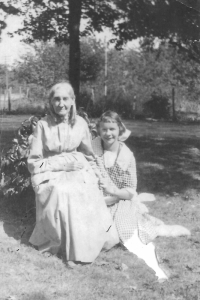 This story was given to me by Eleanor Seitz McIlvried. Enjoy her memories.

When I was 8 years old, woods of chestnut trees and fields surrounded the family home my parents bought at Stop 19 (Hall/Columbia Road). Our end of Bay Village was just being developed. My neighbor was Blanche VanDeVelde. Before we became landowners in Bay, we rented summer cottages at Stop 45 (in Avon Lake) and Stop 16 (Forestview Road). It was one of the happiest times in my life!

There were many inconveniences involved. We had no heater, except for a wood and coal stove in our living room, no water except from a pump at our sink, and no lights except from kerosene lanterns. We were lucky to have a bathroom with a tub, sink and chemical toilet, but had to carry water on our kerosene stove in the kitchen. My mother worked for Mrs. Chandler, a teacher at Bay. I ended up a babysitter for George Chandler, one of Bay’s distinguished graduates (Class of '47).

Our only other permanent, yearlong neighbors were the McIlvrieds. I really admired their son Jack, daughter Ruth, and their beautiful car. How could I have known that some day in the future, I would become their daughter-in-law! Our neighbors lived near the Lake Shore Interurban tracks (close to the beach).

The streets had a number as well as a name. Our street, #19, was listed as such on the interurban records. I rode it to Parkview School. I was in the third grade. My teacher was Miss Brown. The school included K-12. I was saddened to read of the deaths of Jack Meddick and Robert Swanker, two of my classmates. Jack sat in the desk in front of me in third grade. In high school I excelled in acting, encouraged by Miss Marvel Sebert, and had a prominent part in two plays.

Everyone traveled by car, streetcar, bicycle or foot. Columbia Road was slag and there were no sidewalks or ditches. New roads were being put in around us, including Wolf Road. When we moved to Columbia Road, of the original six cottages, three were scattered around and three were left facing Hall Road. There were forests behind the field at our house. The farm owner’s cow, “Pie Face,” furnished our milk. (The Tuttle family lived on the west side of Columbia Road at Lake Road.)

We sometimes watched the farmer milking her and then he would pour the warm milk into our quart bottles. His name was Ed Tuttle and he inherited all the land across from us except for one house and lot which had been willed to our permanent neighbors, the McIlvried family, by Ed’s father. A New England style white country church (Bay Presbyterian, once the East End School,) stood on land donated by the Tuttles next to their farmhouse. (The Tuttles' 1838 homestead house still sits west of Columbia and Lake on the south hillside.)

My sister Sylvia and I really enjoyed swimming in Lake Erie at the beach at the end of our street (Columbia Road Beach). Jack McIlvried, several years older than me, was allowed to accompany us. Now and then his sister Ruth would go along. Jack attended the one-room schoolhouse on Lake Road at Stop 30 (Rye Gate). Jack was our only playmate. After a few years they rented their place and moved away. Years later he returned to repair their rental house and looked us up.

On Saturdays, Ruth, Jack and I would go to a dance in the Cleveland area – places like Lotus Gardens, The Green Parrot, Bedford Glen, Trianian Ballroom, Euclid Beach Ballroom, etc. I graduated from Parkview School in 1934 and was the first in my class to be married. I married Jack McIlvried.

I knew the Serbs when they were fellow students. Everyone loved Mom Serb, who was our cook at school. My teacher, Miss Barclay of Domestic Science and gym, married my physics teacher, Mr. Secrist. We all liked Miss Mabie, our music teacher, and Mr. Glen Ganyard, who spoke of his happy days in summer plowing at his uncle’s farm near Medina. Little did I know that in the future, my father-in-law would someday buy the farm next door. Jack and I moved into the 22-room house there in 1940. We still have the farm and rent out the fields. I still remember old Grandma Tuttle (Victoria Clague), in her long dress and sunbonnet, churning butter on the back porch.