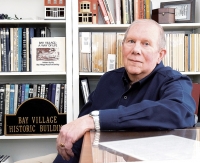 Tom Phillips, the 2019 Bay Village Citizen of the Year. Photo by Denny Wendell

For a man who has dedicated much of his time and effort to preserving the history of Bay Village, it seems fitting that Thomas Phillips' name will now be recorded in the history books as well. Tom, who has been an active member of the city’s historical society for 27 years, was recently selected as 2019 Citizen of the Year by the Bay Village Community Council.

Tom served as president of the Bay Village Historical Society from 1992-1995, followed by 17 years as treasurer. He has been director of the Osborn Learning Center since 1995, and represents the historical society as treasurer for the Northeastern Ohio Intermuseum Council. Tom was also one of four volunteers who coordinated the Bay Village bicentennial celebration in 2010.

“The society is important to me because we are a group of people that are dedicated to preserving the rich history of Bay Village in both pictorial and archival records,” Tom said. “We are often referred to as the ‘hysterical’ society due to our dedication to the preservation of the Bay way of life.”

Perhaps Tom’s most notable contribution to the heritage of Bay Village was his effort to save one of the city’s historical structures. When he saw a notable landmark – the Reuben Osborn house – about to be lost, Tom jumped into action.

“By accident I was driving down Lake Road when I saw a bulldozer in the front yard” of the Osborn house, Tom recalled. “The house was historically significant in that it was oldest frame house in Bay and Rueben Osborn was once the mayor of Bay. I went to the city council to plead my case to save the house. They agreed to save the house and place it in Cahoon Park.”

The house is now home to the Osborn Learning Center, where Tom spends most Sunday afternoons from April to December, educating visitors about the history of the city.

Tom was also instrumental in helping Sally Price relocate the Fuller House from its original location on the former Lawrence homestead (where the Cashelmara condominiums now stand) to the Baycrafters (now BAYarts) campus.

Tom, a lifetime resident of Bay, serves as a board member for the Bay High Alumni Association. He was a scoutmaster for Boy Scout Troop 235, staying with the troop even after his two sons, Tom, now 43, and Nathan, 39, had gone through the program.

“Tom’s devotion to Bay Village is lifelong and unquestioned,” his nominator wrote in recommending Tom to the Community Council selection committee. “Bay Village is, and always will be, first in Tom’s heart (well, maybe second to Peggy, his wife).”

“Growing up in Bay was special to me,” Tom said. “Because Bay is a smaller community, we have a great community spirit. Bay is special due to assets like the Metroparks, BAYarts, the nature center, and of course Rose Hill and the Osborn Learning Center. You can also go anywhere in Bay on bicycle! Not many communities can boast about that.”

When designing extracurricular programs to serve the residents of a city, some segments of the population are easier to satisfy than others. Bay Village offers myriad activities for children, families and retirees through the recreation department and senior center. But for the active population over age 60 – who often don’t consider themselves “seniors” – and may still be working full-time, the options are more limited.

Or at least, they were. Last year, the Dwyer Senior Center launched BV60+ to reach this age group. The program has been a big hit, prompting the Bay Village Community Council to name BV60+ as the 2019 Project of the Year.

Leslie Selig, director of the community services department, said the program “provides the benefits of the senior center (physical activity, mental stimulation and socialization), but in a format that is more appealing to this demographic. Most of our events are held in the evening, outside of normal senior center hours, to allow those still working to participate.”

BV60+ activities offered include sporting events such as Pickle Ball, disc golf, bowling and ping pong; and group outings to places like BAYarts and the Flats.

“Participation has far exceeded our expectations,” Leslie said. “We have learned that the combination of being active and social seems to really resonate.”

The idea for BV60+ originated in 2017, when the city was working on a 5-year strategic plan for the senior center. Two versions of a survey were sent to residents, one for those age 60-70 and one for age 70 and older. The response rate was higher from the younger set, indicating that there was interest in programming that needed to be explored further.

Five focus groups followed, and the younger participants repeated a theme that struck home with the senior center’s director.

Five volunteers formed a committee to kickstart the program – Vicki Sprague, Debra Jesionowski, Mike Shaughnessy, Mike Pascuzzi and Brenda Warner. Vicki, the chairperson, was later hired by the city part-time and is the official BV60+ coordinator.

“True friendships and connections are being made within the group; it’s not just about activities,” said the coordinator, Vicki Sprague. “It’s helping people find a place where they belong. It’s a wonderful thing.”