BAYarts will honor Gary and Pamela Ebert at Moondance 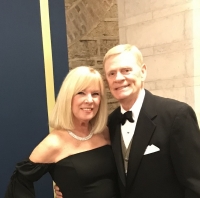 Each year at BAYarts' annual fundraiser Moondance, a person (or people) who has made a difference in the community and in the arts gets a chance to "shine in the moonlight." On Sept. 14 this year, BAYarts will honor Gary and Pamela Ebert, who individually and together have contributed a lifetime of service to Bay Village and to BAYarts' continuing expansion.

In 2006, when BAYarts was forming a new board and hurdling other challenges, Gary stepped up with legal counsel and a genuine interest in seeing the new organization succeed. He has remained on the board ever since (only occasionally leaving a meeting early for another city meeting or a grandchild's sporting match). Pam was the creative force behind BAYarts' sold out ENCORE! last year, a benefit for the playhouse renovation, raising twice the targeted funding goal (while making it look incredibly easy).

Together, the Eberts are benefactors of BAYarts' historic red caboose, a passion project, funding renovations and upkeep over the years and dedicating it to their grandchildren.

Gary and Pamela graduated from Ashland University and moved to Cleveland so that Gary could attend law school. Pamela taught elementary art in Rocky River and later music at St. Bernadette in Westlake. They moved to Bay Village in 1976 where they raised their three children – Carrie, Amanda and Brian – and immediately became very involved in the community. Gary ran for city council in 1982 and in 1986 was appointed law director. Together they co-chaired the Mayor’s Charity Ball for more than 20 years.

Over the years, Gary was president of the Bay Men’s Club, was involved in Kiwanis and co-founded the Village Foundation (now the Bay Village Foundation) with T. Richard Martin – dedicated to benefitting city organizations through funding and scholarships. Although he recently retired from the city, he remains a consultant and keeps up with his busy law practice. He is on the leadership council of St. John Medical Center, a trustee for “Wigs for Kids” and, in addition to BAYarts, is on the board of directors for the International Municipal Lawyers Association.

Pamela was an active member of Bay Village Juniors, the Welcome Wagon and St. Raphael Guild where she served several years as the president. She has been a force at St. Raphael School for many years, as president and member of the Home and School Board, on countless other committees and substitute teaching. Before St. Raphael's had a full-time art teacher, she started the Picture Lady Program, taking art history directly to the classroom. It is no surprise that in 1997, she was named Bay Village's Citizen of the Year for her volunteer work redecorating City Hall and other public buildings.

These days many of the Eberts' activities revolve around their five grandchildren. Pam is still active in the arts: painting, sewing and knitting hats for “Wigs for Kids.” Gary is an avid gardener and loves to golf. Together they enjoy travel and spending time with family and friends.

Learn more about Moondance at bayarts.net/events/moondance.

Nancy Heaton is the Executive Director of BAYarts