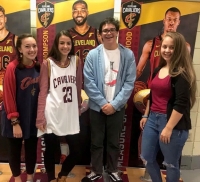 Westlake High School senior Vince Sovacool was named the Ohio SADD (Students Against Destructive Decisions) Student of the Year for his “passion, activities and creativity” in his local chapter, community and school.

In their nomination of Vince, his fellow WHS SADD members and advisor Kathy McGinty called Vince an excellent friend and role model. They said he “embodies the SADD mission in his daily life and has never been shy about incorporating the SADD principles in the activities that are important to him.”

Vince is the second member of his family to serve as a SADD officer – his sister Nora (WHS Class of 2017) served as an officer during the 2016-2017 school year – and he has been active in the club all four years of high school. Among the projects Vince spearheaded or participated in during his time with SADD include:

In addition to his involvement with SADD, Vince takes an active role in working with students with special needs in the Westlake City School District.