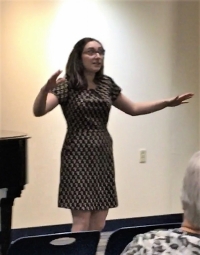 The audience sat in polite silence as the young artist began, but soon it was obvious the silence continued out of astonishment and admiration for Courtney Hausman’s performance. Excellence is a norm for graduating seniors in Baldwin Wallace’s prestigious music theater program, but Hausman has worked to finely tune her talents to an amazing level.

For her nearly hour-long performance on Feb. 26 at Westlake Porter Public Library, Hausman offered an array of musical show tunes that revealed her vocal strengths and her ability to personalize the emotions of the lyrics.

Included in her repertoire were selections from classic hit musicals such as “Funny Girl,” “South Pacific,” “Carousel” and “Sound of Music.” But numbers from “Waitress” and “Avenue Q,” which are currently on Broadway, were also included.

Hausman’s renditions of "Honey Bun" from “South Pacific” and "Itsy Bitsy Teenie Weenie Yellow Polka Dot Bikini" were a delight and “Carousel’s” "When I Marry Mr. Snow" was just beautiful. After singing "My House," she closed with "Not for the Life of Me" from “Thoroughly Modern Millie.”  She gives credence to every line she sings.

Accompanying Hausman on the piano was Beth Burrier, BW associate professor and music director. Their obvious respect for each other and familiarity with the selections was evident throughout the program.

Following Hausman’s performance, the audience posed questions and voiced praise. She said she was drawn to musical theater from an early age and her role models include Ella Fitzgerald, Judy Garland and Barbra Streisand. While admiring these music legends, Hausman does not imitate, she successfully works to make each song her own.

Hausman’s agenda includes April auditions in New York with the other BW music theater seniors, graduation, and a move to New York in the fall. She goes with the good wishes and predictions of success from the audience that she completely captivated at Porter Library.

This is the seventh year that the Westlake-Westshore Arts Council has sponsored “Catch a Rising Star” a musical presentation that showcases BW senior theater students.