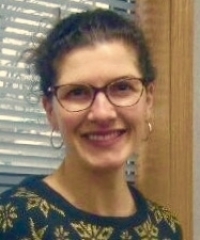 Devon Gess and her father, William Bonds, have started the Carleen Herring Bonds fund in honor of her mother to add music lesson rooms to the former playhouse at BAYarts.

Devon Gess, Bay High School's choral director, has touched the lives of many, whether winning all those countless awards highlighted on the district's electronic marquee or for the annual holiday concert with the "singing tree." Gess has inspired both students and the community.

"Mrs. Gess loves music but even more so when other people enjoy the music," said former Bay High Choraleer C.J. Hyland. "She challenged us to be better, but more importantly she wanted us to enjoy the music."

Now, in loving memory of her mother, Gess and her father, William Bonds, have established the Carleen Herring Bonds fund, for music lesson rooms to be part of the renovation of the former playhouse at BAYarts.

"My mother was both a musician and a woman who supported education," said Gess. "She had a contagious enthusiasm for music, education and Bay Village."

A 1962 Bay High School grad and member of the Bay High School A Cappella Choir, Carleen Herring Bonds always joined her daughter Devon on the school stage for the closing song of "The Lord Bless You and Keep You." When the news was announced that BAYarts would be expanding and saving the former Playhouse space rather than have it be demolished, Gess and her father saw a perfect way to honor Carleen at a place that holds so many memories for their family. The history they share includes Gess and her mother participating in various musicals; her grandparents being both donors and season ticket holders.

In the expanded campus, Gess knew there would be room to help solve a problem that had been on her mind.

"I have been frustrated over the years that there were not more options for my students to take musical lessons locally. So I asked BAYarts to include two soundproof rehearsal rooms in the renovation for individual vocal, piano, and/or guitar lessons."

In honor of her mother, Gess and her father have donated $8,000 for the music rooms, and other donations have followed. "BAYarts has been a big part of the lives of my family and myself," emphasized Gess. "We're reaching out to request the community's support in raising matching funds which will help move the project closer to its goal."

Donations can be made online at bayarts.net/donate/options or by calling 440-871-6543. People may also contact Nancy Heaton, BAYarts' executive director, at nancy@bayarts.net, for more information on the expansion and making a gift.