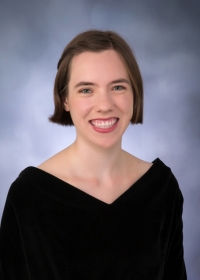 Bay High senior Amelia Johnson was named National Merit Finalist this month, a prestigious academic achievement awarded to less than one percent of Preliminary SAT test-takers in the U.S. She is hopeful the designation will lead to both acceptance and scholarships to colleges where she’d like to major in music education and performance.

"I feel that my musical training has taught me to work very hard and has taught me discipline," she said. "These skills have definitely helped me succeed in other academic areas."

With two pianos in her home, making music was simply a part of growing up for Amelia. In fact, with four piano players in the family (including parents Lisa and David, and sister Annalise), the girls’ piano teacher provided eight-hand arrangements for the family to perform. She has been reading music and playing piano since the age of 5.

Amelia began her band and orchestra performances playing clarinet in Bay Middle School’s Fifth-Grade Band. She switched to her current instrument, the oboe, in the sixth grade. Amelia has since played the oboe in many Bay Village Schools music ensembles including Bay High’s Symphonic Band, Chamber Orchestra and Pit Orchestra, and she serves as Field Commander for the Bay High Marching Band.

She has also auditioned for and won spots on local, regional, state and professionally-affiliated music ensembles. She has been part of the Cleveland Orchestra Youth Orchestra for the past three years, and she has performed with the Contemporary Youth Orchestra (in residence at Cuyahoga Community College) for five years. She also plays with the Cleveland Institute of Music’s Cleveland Youth Wind Symphony. Amelia recently earned a spot, for the second year in a row, on the Ohio Music Educators Association (OMEA) All-State Band, this year as Principal Oboe.

Travel has been a side benefit to performing for Amelia. She visited Italy touring with the Cleveland Youth Wind Symphony. She will travel this summer with the Cleveland Orchestra Youth Orchestra to perform in Vienna, Budapest and Bratislava. Even her college music school auditions have afforded her new travel adventures. She has applied to five university music schools, all requiring her to audition in person. She saw Niagara Falls for the first time when visiting the Eastman School of Music in Rochester, New York.

Citing Bay High band director Darren Allen and Bay Middle School band director Mark Award as role models, Amelia wants to have a career teaching music at the K-12 level of school. And like those mentors, she wants to perform in professional music ensembles at the same time. She notes that she already gets paid for a music gig – she plays piano at her family’s church, Christ Church Westshore.

"Mr. Allen and Mr. Awad are great teachers and great musicians," she said. "That's what I want to be."