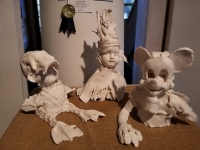 The Best of Show distinction went to Cleveland artist Kimberly Chapman for "'A' is for Active; 'S' is for Shooter." Photo by Jessica Stockdale

The March 8 opening reception for the BAYarts Juried Exhibition was packed with artists, art lovers, and their friends. From 200 submissions, 93 entries were selected and grace the walls of the Sullivan Family Gallery in the Fuller House.

There is a mixture of contemporary, abstract pieces by artists like James March, Cherry Rappoli and Susan Shafer, which are juxtaposed against traditional portraiture by Dave Ward and Ken Smith. Everything in between is also displayed, from photographs and monoprints to encaustic and ceramic works.

The Best of Show distinction and award went to Cleveland artist Kimberly Chapman for "'A' is for Active; 'S' is for Shooter." Made of porcelain and glaze, it consists of three figures which are individually titled "Sitting Duck," "Be Brave" and "M-I-C-K-E-Y M-O-U-S-E Gas Mask."

In an accompanying artist statement, Chapman writes that the head sculptures "allude to the rising trend of mass shootings in American schools. According to several sources, 2018 marked the deadliest school-shooting year in history. With many parts of the U.S. having about 180 school days per year, it means on average a shooting takes place once every eight school days." Chapman goes on to write that many mass shootings often do not make worldwide headlines and pass by without notice. "Campaigns for tighter gun control and even weapons for teachers and school staff have done little to curtail the episodes."

Chapman describes her figures as costumed, and says the reason for this is to "illustrate the children's vulnerability and uncertainty at school."

The additional winners are:

The exhibit will be on display through April 6.