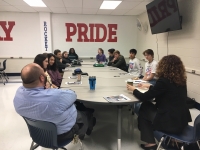 Teenagers have a lot of opinions, and they are sharing them at Bay High School with their superintendent of schools, Jodie Hausmann.

Mrs. Hausmann has formed a Superintendent’s Student Advisory Council, including students from all four grade levels at the school. She wants to know what kinds of pressures students face on a daily basis, what kind of improvements they believe can make their school even better and, perhaps most important, what they see as the very essence of their school and wider community.

Principal Jason Martin, who also meets with the council, said he selected its members specifically because they were good school citizens. And while some had taken on leadership roles in the past, others tended to contribute in “quieter” ways.

“All these students have supported the efforts led by others,” said Mr. Martin. “Those supporting roles may give them a perspective that is a little different from the students we hear from more often.”

Breakfast is served as students meet before school once a month. The format for the meeting is a very casual give-and-take between the students, Principal Martin and Superintendent Hausmann.

The group recently participated in a pre-strategic planning exercise, the same one being done by all the school’s staff members. The idea is to determine the most important values of the school district, and then to distill those values into a brief slogan or tag line that will easily remind everyone what is important on the highest level. Another aspect of the exercises will be looking at “2030 skills” – those that will be required for today’s kindergarten students as they graduate.

“The discussion around our values was really interesting,” said Mr. Martin. “Community was important to both staff and students, but it was a little different for students. Community for them meant having the confidence to ‘put yourself out there’ and take on difficult challenges or leadership roles, for example, because you knew you had a safety net of a caring family and others. You knew someone had your back.”

Mrs. Hausmann said that as the district moves toward what she hopes will be a community-wide strategic planning effort, student voices are especially important.

Another topic covered this year was school safety. Students expressed positive feelings about the district offering an anonymous tip line and adopting more security at building entrances. When asked specifically whether students would feel safer with a School Resource Officer (SRO) in the building, the response was also positive.

“Students liked the idea of an SRO,” said Mrs. Hausmann. “They were curious about the role, and I explained we would work with the Bay Village Police Department prescribing exactly what the position would entail, such as safety training and preventative education regarding substance abuse. The SRO would also be armed to protect students and staff in the event defensive police action was needed. Some said that would be a comfort to them.”

The district is currently working with the City to win a grant toward funding an SRO from the State of Ohio. The schools have also worked proactively with police to enhance active intruder training and to upgrade radio capabilities within the school buildings, an effort that brought state expertise and dollars into Bay Village to help both entities.

Mrs. Hausmann has been interviewing students regularly in creating her podcasts (available to the public at www.bayvillageschools.com). She has interviewed student athletes, club leaders who've raised many thousands of dollars, musicians, singers and those entering academic competitions like robotics. She plans to interview members of the advisory council to share what they are doing with their fellow students and the community.

“I am so impressed by the students I meet at the high school, and at every grade level,” she said. “I want to share with our community how our children are both preparing for their futures and remaining focused on doing good in the world. They are such great kids, and I hope people will take some time to listen to the podcasts and get to know them.”

Students and the community can also keep up with Mrs. Hausmann as she posts her observations and news about our schools on her Twitter account, @Hausmann_Bay.