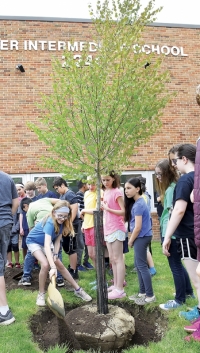 DIS fifth-grader Julia Richards takes her turn shoveling dirt on the Katsura tree in front of the school. Photo by Tara Wendell

Several weeks prior, the students were invited to create posters depicting "Why trees are important to me!" Their posters were then judged by Tree Commission members John Walz, Margie Rossander, Diane Morris, Justin Parks, Mary Beth Schneidler and Stan Barnard. Over 131 posters, the most ever submitted, were judged, with six winners and six honorable mention winners being selected.

The top posters were submitted by: Natalie Chang, Kyle Williams, Ashton Mosham, Gellert Leszko, Rahini Sharda and Rishita Sharda. Honorable mentions were awarded to Abby Pelles, Dallas Harris, Marissa Thompson, Alex Hunt, Sammy Jang and Ella Wright. At the tree planting, each of the winners received a proclamation from the mayor along with a ribbon recognizing their achievement; all honorable mention winners received a ribbon also!

Following the awards, each of the students who submitted a poster were invited to help plant a Katsura tree in front of their school. Mr. Barnard and the Service Department helped prepare the site and explained to the students the proper way to plant a tree. All of the students who participated in the contest also received a White Pine seedling tree to plant at their homes.

Arbor Day in the United States began in Nebraska in 1872 when 1 million trees were planted. It was named Arbor Day since "Arbor" means "tree" in Latin. In 1970, President Richard Nixon declared it a national holiday and declared that Arbor Day would be celebrated on the last Friday in April. That holiday continues today throughout the United States with only two states celebrating on a different day because of their growing season ... Alaska celebrating in May and Hawaii in November!

Westlake has been a designated Tree City USA for 28 years and has worked very hard to plant and care for the trees in Westlake. Much is also done to educate residents about trees. This tree planting is just one of the many things happening throughout Westlake to beautify our city and preserve our trees!