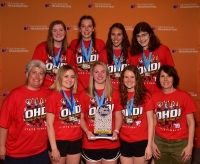 Presentation of the projects includes a storytelling and a performance aspect. Challenges are time-constrained, and while teams have a general idea of what will be expected in their chosen challenge performance, details are not given out until the scheduled performance time.

This year, Aqua Girls chose the Improvisational Challenge, and they performed a skit based on their previous research of historical figures appearing on coins throughout the world. They were required to incorporate comedy and tragedy, to incorporate a story-line surprise obstacle, and to change from verbal performance to mime half-way through the presentation.

The Bay High team has been together for eight years, first qualifying for the Global Finals in Knoxville, TN as fourth-graders at Westerly Elementary School, when they chose a Service Learning Challenge and arranged for a group of community members to clean up Huntington Beach.

In 2015, the team came in second place in the world for their Challenge selection, Feary Tales, requiring a blend of artistic creativity and problem-solving skills, creating a character and story line, functional artwork as scenery, and using stagecraft to perform an illusion.

Attendance at the international level, earned by competing at regional and then state levels, is a rare opportunity to interact with students from across the U.S. and from all over the world. The students mingle during meals and other events, such as trading team-designed and state-designed pins, a popular activity that encourages students to talk with one another.

The Aqua Girls plan to participate in Destination Imagination next year. As seniors, they will each earn a "red tie," which marks them as alumni of the program and allows them to return to DI competitions as volunteers in the future.

Parents Michele Moore and Kim Ray have been the team's managers, and Marian Harmount, gifted education coordinator at the school district, has been the student advisor for all the district's Destination Imagination teams.