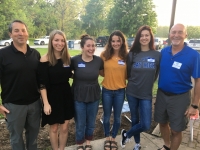 Scholarships are awarded based on need, character, scholastic achievement and leadership qualities. The four students and their families were honored recently at the club’s annual golf outing and pig roast at the Bay Lodge.

“The accomplishments of these four recipients, both academically and in other fields, was most impressive,” said Peter Gierosky, scholarship committee chairperson. “The Bay Men's Club is happy to provide this seed money for our leaders of tomorrow.”