Dover Gardens may be the area's oldest tavern 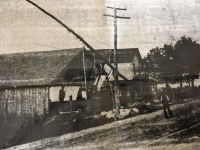 A photo, supposedly taken in 1876, showing a hickory pole raising in front of the Harvest Home tavern, which is now Dover Gardens. Photo from the Westlake Historical Society collection.

Dover Gardens Tavern has had many lives and now has a new face. The owners recently re-faced the exterior of the landmark at 27402 Detroit Road with new siding.

About five years ago it was questionable if the business and the building would survive after an out of control pick-up truck smashed into the building during a police chase, seriously injuring 13 people. The old timbers held and now the building looks refreshed and ready for many more years of good times for patrons.

The existing building dates to at least 1874 when a hotel and grocery building with a similar footprint is shown in the same location on 66 acres straddling Detroit Road, owned by C. Brenner. The same building is shown on a 1927 plat book with two outbuildings on an 8.78 acre parcel owned by Anton and J. Michelich. Tax records indicate jumps of value in both 1871 and 1881 though the county lists the year built as 1890.

There was a slight rise in value in 1888 but the property actually went down in value in 1891 with no reduction in acreage. We lean toward a construction date of 1871 for at least the first part of the building because it was in 1870 that Sophia Brenner purchased 20 acres including the property that the building sits on. It is difficult to date buildings during this period after the Civil War because improved rail transit and advances in lumber milling standardized building construction. Perhaps one of the gabled portions of the building was built in 1871 and its larger twin in 1881?

In “A History and Civics of Dover Village” published by the Westlake Historical Society in 1981, editor Bill Robishaw states on page 65: “Editor’s note: the following information was obtained from a 1927 Cleveland newspaper article, received from Ruth Brenner, a grand-daughter of Charles F. Brenner. Charles Brenner owned and operated a tavern, the ‘Harvest Home,’ on Detroit Road a short distance west of Dover Road. He kept the Tavern open all night for the accommodation of travelers. ‘His dinners, with smoked sturgeon as the chief dish, were acclaimed by his patrons.’ Mr. Brenner also operated a large farm, providing vegetables for the tavern. ‘In winter, Harvest Home was the destination of a majority of sleighing parties out of Cleveland. And every evening during the summertime, scores of rigs stood in the tavern yard while swains and their sweethearts dined at the famous resort.’ In 1980, the old Harvest Home building is occupied by the Dover Gardens, a modern-day tavern.”

The same article states that Charles F. Brenner was born in 1830 in Germany, immigrated to the U.S. in 1849, served in the Civil War and opened his tavern after the war. It also says that after he died in 1894 the family exchanged the tavern and farm for property in Cleveland.

A photograph of the building with both gables was provided to the Westlake Historical Society in 1980 by Mrs. Josephine Potter who had once lived above the tavern. It accompanied an article about “Grandpa Brenner” with the handwritten statement that the picture possibly shows the raising of a hickory pole in 1876 to show Brenner’s support for a candidate for president that year. One of the outbuildings for horses and carriages of visitors is visible in the photograph as well as a wood utility pole, so the picture could be as late as perhaps 1910.

“A History of Cleveland and Its Environs” published in 1918 has a biographical profile of Charles F. and Sophie Brenner’s son, Charles Brenner. It notes that their son was born in Cleveland in 1865, and that he and all of his siblings were educated in the Dover Schools. Charles Brenner (the son) was a prominent figure in Cuyahoga County politics for many years. He attended the Spencerian College in downtown Cleveland, studied law, was associated with a number of judges in Cleveland, was “captain of Central Viaduct” under the mayor of Cleveland, worked in a private detective agency, served as a constable and as a justice of the peace in both Lakewood and Brooklyn Township, Ohio.

An article in the Plain Dealer in 2017 stated that current Dover Gardens Tavern owner Gary L. Hurst had unearthed photos and maps trying to date the age of the bar “attached to a 19th century house” which had confirmed that it went back to the late 1800s/early 1900s. If the bar is older than the 1895 Harbor Inn in the Cleveland flats (which in all likelihood it is) then it is the oldest bar in the Cleveland area.

According to this same article it was a general store during Prohibition and reverted to a bar after the repeal. It has been owned by three generations of the Hurst family since 1955. The property was first owned by Lloyd M. Hurst, then Harold J. and Ida Hurst and now Gary and other members of the Hurst family.

Prohibition lasted from 1920 to 1933 and a Dover Village directory from the 1930s lists Anton Michelich as living at this address. It also lists John “Michlich” as occupying 694 Dover Center Road – the current Moosehead Saloon, so the bootlegging story has some credibility.

It appears, with the new siding on the building, that it is time for “another round.”