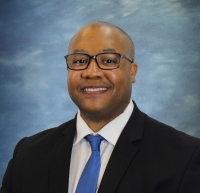 Ramsey Inman will be assistant principal at Bay High this coming school year.

"Ramsey's educational vision encompasses meeting a wide range of student needs in a wide variety of ways, and we were amazed to see he's done them all," said Superintendent Jodie Hausmann. She noted that the interview process was extremely thorough, with more than 100 applying for the position. "There was a consensus with those we talked to that he is a great listener and that we are extremely lucky to have him come to work at Bay High School."

Bay High principal Jason Martin led the interview process. “Mr. Inman connected strongly with team members during his interviews,” he said. “He provided evidence of his strength in leadership and, most importantly, prioritized the building of relationships with teachers, students, and community members. We believe he will be an impactful leader from day one and will help us continue to provide a high quality educational experience for the students of Bay High School.”

Inman holds a master's degree in educational administration from Ursuline College and a bachelor's degree in secondary education and integrated social studies from the University of Akron.

"Bay Village is a model district for Northeast Ohio," said Inman. "I always want to align myself with excellence, and I have always used models of excellence for improvement wherever I have been." He said a number of his friends live in Bay Village and have told him how positively the schools have impacted their children, urging his young family to move to the city.

He and his wife reside in the Ohio City neighborhood of Cleveland with their 16-month-old son. He replaces Aaron Ereditario, who was recently named principal at Bay Middle School.

"I hope I will be able to provide something new while building on the great tradition of excellence here," Inman said.

Submit New Event
Saturday, August 8:
10:00 AM - 11:00 AM - Support for a Child or Teen with Cancer, Including Siblings and Parents