The Cahoon and Andrews Connection 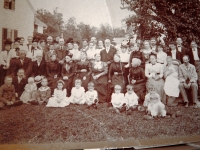 The Cahoon, Andrews and French families are pictured at a 1905 reunion at Rose Hill. Jenny and Edwin Andrews are seated on the far right, with Louise in her Grandma Jenny's lap.

I have looked through many Cahoon family reunion pictures and noticed the Andrews family of Rockport Township (Lakewood) included as part of the family.

Louise Andrews Saunders was a good friend of my mother, Alberta, and her husband, Jack, an old buddy of my dad, J. Ross Rothaermel. Louise knew my sister Gay and I were interested in the Cahoon family and Bay history. When she was visiting one day in 1974 she mentioned a picture of a Cahoon family reunion that she was in. We knew the picture she meant and she told us she was the baby on her grandmother’s lap. Then she told us the story which I will try to relate.

Mary was the oldest daughter of Lydia and Joseph Cahoon. She traveled with the family on Oct. 10,1810, to Dover Township as a new bride with child. She married George Sexton and had eight children. They lived in Ridgeville (North Ridgeville) on Center Ridge Road. They had a daughter referred to as "beautiful Mary" in the Cahoon papers.

Beautiful Mary Sexton married William Harron. The family of William Harron’s brother lived in the area. (I do not know their names.) They had a daughter, Jennie V. Harron. The brother and his wife died from a sickness leaving Jenny homeless.

Price French came to Rockport Township in 1828. He worked in construction. His son, Collins French, married into the Harron family. When Jenny Harron, their niece, became homeless, the couple adopted her and she took the name Jenny French. Collins did not have any children. Jenny was near the same age as Joel Cahoon’s children: Ida, Lydia, Martha and Laura.

Jenny met Edwin Ruthern Andrews after the Civil War and married in Rockport Township. Andrews became the partner of Collins French in the raising of fruits and fancy grapes. Jenny and Edwin had four children: Jay, Frank, George and Edwin Jr.

Louise, their granddaughter, is seen sitting on Grandma Jenny French Andrews' lap in the reunion picture. Edwin sits to her left. Jenny and Louise moved and appear blurred. Behind them are the four brothers and Louise’s mother. I love this picture. It looks like the girls found a bolt of dark material they all liked and had matching dresses made.

Louise Andrews Saunders said she remembered many family reunions growing up. Louise said the kids were not allowed in the house. Only if they were chaperoned could they enter and see the White House desk in the parlor. (Wonder where that is today.) She said the girls were nice, very reserved. She inherited Cahoon glassware and silver. Rose Hill displays these items today.

The Andrews and French families owned a fruit farm and orchard on the west side of Rockport Township on Detroit Road that ran north to Lake Erie. They were successful farmers. (Lakewood's Andrews and French avenues were named for the families.) The white clapboard house with its dark green shutters faced Detroit Road. It was built by Collins French for his bride in 1853.

When the land sold in 1938 to the Madison Improvement Co. to build a strip shopping center, the Masonic Temple and new streets, the house was to be dismantled. My dad paid a visit. He said there were five fireplace mantels, three marble. All beautiful which he could have purchased but he didn’t know what he would do with one.

He did take the dark green wooden shutters which next appeared on our house at 31011 Lake Road for 30 years. He also took the desk Edwin used to pay his bills and sort the mail (he was an area post office). It was so big we wondered where he was going to put it. He found a  place and in the end it ended up in my house. He also took the workbench. This wooden workbench became known as Grandpa’s workbench with all its dogs, holes, and wooden vice on the side. My son, Christopher, now owns it in Vermilion. Hopefully it will be passed on through the family for many years.