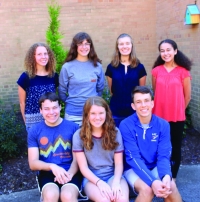 Seven seniors at Bay High School have been recognized in the 2019 National Merit Scholarship program. These academic distinctions are earned through scores on the Preliminary SAT tests, taken in the junior year of high school, that fall within the top 3 percent of the 1.6 million student scores from 22,000 high schools throughout the nation.

Ben Anderson, Owen Meadows and Audrey Ray were named National Merit Semi-Finalists. The pool of Semi-Finalists, about 16,000, represents the top one percent of PSAT scores throughout the nation.

While none of the recognized students have settled upon a college or university, most have decided on an area of study. Ben Anderson plans to major in engineering. Owen Meadows expects to major in biochemistry or premed. Audrey Ray is undecided about a major.

Kaia Atzberger hopes to double major in astrophysics and dance, Elizabeth Holup would like to pursue public policy or American studies, Anne Lang is interested in studying environmental science or environmental engineering, and Patty Yuhas plans to major in actuarial science or data analytics.

There is one thing all the National Merit scholars agree upon, and that is that Bay High School prepared them well on many levels. Ben Anderson cites the environment that let him succeed in athletics and in philanthropic and leadership endeavors like the Key Club Thirst project. Audrey Ray and Patty Yuhas, both part of a nationally-ranked Destination Imagination team since fourth grade, cited the people and camaraderie at Bay High. Owen Meadows cited the people at Bay High who make the school great, and Annie Lang noted that while students can be competitive at the school, they are also very supportive of one another. Kaia Atzberger said her teachers encouraged her to aim high. Elizabeth Holup cited the passion for learning that teachers bring to their students.

"We sometimes forget what makes these awards so prestigious,” said Superintendent Jodie Hausmann. “They truly represent the dedication to lifelong learning that these students practice. The National Merit award is a distinction that these students will carry with them for the rest of their lives.”

Students earning these distinctions become eligible for a variety of scholarships offered by colleges, corporations and the National Merit Scholarship Corporation.