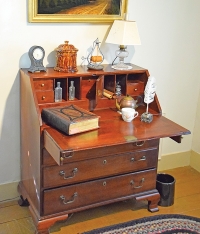 The desk sits in the 1818 parlor at Rose Hill Museum.

Our Winsor family originated in Smithfield, Rhode Island. They were Rhode Island Baptists. (As were Lydia and Joseph Cahoon). We aren’t sure how many siblings there were in the family, but we do know four sisters by name: Sally, Julia, Elizabeth and Mary, and two brothers, Henry and Andrew.

Henry Winsor, a son, traveled to Dover Township by way of Cooperstown, New York, arriving around 1813 ( a son, Henry Jr., was born in Ohio in 1813.) The Winsor name is associated with Lot #91 on the west side of Bradley Road.

The family is in possession of a letter from Andrew Winsor to his brother Henry in Dover Township in 1817. Henry was a farmer. In 1818, his sisters advised him they would like to come care for his son, Henry Jr. Perhaps his wife had died.

In 1837 the Winsor family divided the family estate between the children. Henry’s name is not on it. We assume he died. When he arrived in Dover Township with his belongings, his personal walnut writing desk was in the wagon.

Elizabeth Winsor married Aaron Aldrich and had one son, Aaron IV, when they came to Dover Township in 1816. Aaron, a tall, angular man, worked in cotton mills. He never farmed. They were coming to a land of forest and trees. They purchased Lot #41 on Bradley Road across from where the Lakewood Country Club is today.

With Henry’s help, the Aldrichs felled the trees, built a log cabin and cleared the land. Aaron, not used to this heavy work, soon found his back aching and became disabled. Not being able to continue his chores made life in the little log cabin difficult. An offer to take charge of a cotton factory in Otsego County, New York, found the family returning east. They returned in 1829 and built a house on Lots #98 and #92 in 1830.

In 1813, Mary Winsor Brown arrived in Dover Township and farmed on Lot #90. The Brown boys grew big and tall; it was said it could only be accounted for by their location on the banks of Lake Erie. Their farmhouse was still standing when the Lawrence family purchased the lands in the area. It was used by the Lawrence family for housing family and friends.

In Henry’s wagon was his walnut desk with its cubby holes, pull-down writing table and dresser drawers. Over the years, Henry’s desk moved into the Aldrich house on Lake Road. This double house had a two-story west wing and a single-story east wing. Lucy Peal lived in the two-story wing and Mary Anne Stephens and her husband, Henry Aldrich, lived in the east wing. George Drake, Mary Anne’s grandson, spent many hours there with his grandmother and eventually purchased the house from the relatives and moved in. In a small, long and narrow room off the living room in the east end, sat the Rhode Island desk.

My sister, Gay, and I were collecting information for the first-ever written history of Bay Village, "Bay Village: A Way of Life," when we decided we needed to talk with George Drake. George had been our neighbor when we grew up and we knew he would be interested in our project.

The first time we visited him he showed us the desk. Covered in dust, cobwebs, scratches and all, what we found inside was the history of our village and its everyday life. (George and his family never threw away one scrap of paper.) We told George we would catalog everything in the desk if we could have a look. He agreed.

It took us a week of very carefully removing each piece of history and reading the contents and sorting. Gay handled the contents and I wrote it all down in my binder. The information we found could never have been duplicated. Everyday life in the township came alive. It became part of each "Way Of Life" chapter Gay wrote to separate the years in the book. We told George when the time comes, we have to have that desk for Rose Hill Museum.

After George had passed and Marguerite, his wife, decided to sell some of her contents, we came for the desk. It wasn’t free, but we didn’t care. Today, it sits in the front parlor of the1818 room at Rose Hill Museum.

Karen Livingston was called in to refurbish the desk. She was looking over the desk and noticed scribbling on three sides of one of the small drawers. She mentioned how sad it was we didn’t know what it said. Gay and I said we know what it says. (We had noticed it while cleaning it out and were thrilled.)

She looked at us and we told her it says, "Henry Winsor – Smithfield, Rhode Island –1785."