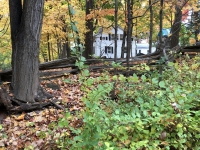 The Charles and Lucy Hall house at 25360 Westwood Road was constructed in 1834 on a glacial kame. Photo by Will Krause

"A History and Civics of Dover Village" by Hadsell and Rutherford states that the rounded granite boulders (called glacial erratics) found dotting gardens and woods in the area were first brought to Dover between 25,000 and 50,000 years ago from northern Canada by glaciers two to three miles thick.

Dr. Brian G. Redmond, curator of archaeology at the Cleveland Museum of Natural History, wrote an article available online titled “Before the Western Reserve: An Archaeological History of Northeast Ohio.” In it he states: “The landscape of northeast Ohio is a relic of the great Late Pleistocene Ice Age. The rugged terrain, which begins just south and east of Cleveland, is known as the Glaciated Allegheny Plateau, an ice-scoured portion of the western foothills of the Appalachian Mountains.

"This land was once covered in thick Beech-Maple forest and small lakes and bogs left behind by the glaciers. The steepness of these ‘heights’ is set off by the nearly flat Lake Erie Plain that hugs the south shore of Lake Erie from Buffalo to beyond Toledo.

"At the time of white settlement, the mixed oak forest of this plain was interrupted by coastal marshes, small prairies, and wide river estuaries. Just west of the Cuyahoga Valley, the land flattens out to become the Central Till Plain, a rolling terrain of glacial soils still covered today in spots by native beech-oak-hickory woodland.”

All of Bay Village and some of Westlake are on the Lake Erie Plain and have a preponderance of mixed oak (and hickory) forest as native trees that still dominate the natural areas and many yards. Bradley Woods Reservation is a beech-maple forest more typical of the Central Till Plain. The fact that Bradley Woods is a swamp forest growing on a shallow depth of topsoil above Berea sandstone makes it a very rare ecosystem.

It was the advances and retreats of later glaciers in our region which helped carve out the depression that became Lake Erie and control its initial drainage and water level. The glacial advances and retreats deposited distinct sheets of glacial till. The last glacier is represented by the brown silty clay that any gardener in the Cleveland area is familiar with, left between 14,000 and 15,000 years ago when the Great Lakes as we know them started their history.

Present Lake Erie is 570 feet above sea level. Early Lake Erie had fluctuations in water level which were controlled by varying inflow via Port Huron, Michigan, and the effects of the rebound of the land at the outlet at Buffalo, New York. The glaciers had been so heavy that when Lake Erie was new the land around the outflow at Buffalo was as much as 65 feet lower 10,500 years ago. Therefore the lake level would have been lower above sea level and the beach from that period is now under water in the current Lake Erie.

According to scientists, as recently as 3,500 years ago the surface of Lake Erie was 13 feet lower above sea level while about 2,000 years ago the surface of the lake was 16 feet higher above sea level. These later fluctuations would not have made much difference to the bulk of the land in Dover due to the high shale cliffs in Bay Village, but low areas around the creeks would have been inundated when the water was higher.

A nearby intriguing land feature is Avon’s Mound Cemetery. For many years it was believed to be a prehistoric burial mound constructed by the Woodland Indians. It was later used as a cemetery by settlers of European descent. Microscopic analysis of the sand particles which form the crest of the mound in 2011 by Dr. Charles E. Herdendorf, local historian and professor emeritus of Geological Sciences at Ohio State University, concluded that the mound is actually the remnant of an ancient sand dune created over 12,000 years ago on the shore of Lake Warren.

The quartz grains were most likely eroded from lake-cliff outcrops of Berea Sandstone nearby. Wave actions in Lake Warren dislodged the individual sand grains from the bedrock. Because the shoreline (now known as Detroit Road) sweeps to the north in this particular spot, prevailing westerly winds were able to blow fine grains of sand into a dune near the southeast corner of present State Route 83 and Detroit Road. The dune probably predates aboriginal Indians in the area by several thousand years. But they possibly used this natural feature as a burial site much as the early white settlers of Avon did which is why it has the name “Mound Cemetery.”

Except for the creek valleys, the topography of Bay Village and Westlake is so flat that one other topographical feature is evident. It is the area west of Columbia Road bisected by Westwood Road. It is another interesting glacier relic – a kame which runs roughly north and south, east of that intersection. A kame is a glacial landform, an irregularly shaped hill or mound composed of sand, gravel and till that accumulates in a depression on a retreating glacier, and is then deposited on the land surface with further melting of the glacier. This glacial kame provided a nice site for the circa 1834 Charles and Lucy Hall house on the northeast corner of Columbia and Westwood roads and other newer homes on the southeast corner of the same intersection.

One last living remnant of the glaciers in Dover are the Canadian Hemlocks which can still be found growing in Huntington Woods Reservation.

William R. Krause, AICP I am the Assistant Planning Director for the City of Westlake. I have worked for Westlake for 30 years. I served on the Bay Village Planning Commission for 5 years. I was a member of the Reuben Osborn Learning Center Steering Committee. I was a Board Member and Historian for the Westlake Historical Society and am a Trustee of the Western Reserve Architectural Historians. I have been married to Debra for 38 years and am the father of three grown children, grandfather of three and owner of a Shih Tzu.