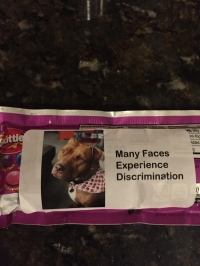 Lester's owner handed out Halloween candy with a message.

On Sept. 11, 2019, Chelsea, a golden retriever, was walking with her owner in a peaceful Westlake neighborhood when a neighbor’s two pit bulls attacked her.

Lester, one of the pit bulls, bit her. His owners were not home at the time. But an acquaintance was. Chelsea’s owner was not hurt.

Lester has a history of biting. In April of this year, he bit a passerby on the thigh. The county investigated and labeled him as a “dangerous dog.” But the city was not aware of the incident.

Westlake, in accordance with state law, classifies aggressive dogs into three levels based on their behavior, subject to different remedies, restraints and penalties:

A dangerous dog, like Lester, must be restrained with a chain-link leash and housed in a secure enclosure. The owner must also have liability insurance of at least $100,000.

What Westlake does not do, according to Jim Wang, Westlake animal control officer, it does not discriminate against pit bulls as a breed. The dog is labeled based on its actions and behavior, not by its breed.

The City acts in accordance with an Ohio State Supreme Court ruling. In 2012, the Court declared breed-specific bans unconstitutional. Typically, these target pit bulls. But the ban can also apply to Rottweilers, Doberman Pinschers and other large breeds.

But many counties and cities have breed-specific bans. In Cuyahoga County, over 20 percent of the cities have such bans. Under their laws, pit bulls (and other large dog breeds) are labeled as dangerous or vicious and are restricted or banned from the city. This information is important for those looking to adopt dogs. Around the west side of the county, the list includes Olmsted Falls, North Olmsted, Fairview Park, Brook Park, Brooklyn, Middleburg Heights and Parma. See bslcensus.com for a statewide listing.

The American Kennel Club is against breed-specific legislation. They state, first of all, “pit bull” is not a specific breed. A pit bull is a mix of terriers, bulldogs, and can be confused with other stocky-head breeds like Cane Corso, Dogo Argentino, Mastiff, etc. “However," the AKC writes on its website, "across the country, ownership of dogs that match these vague physical characteristics are being banned – regardless of their parentage.”

Pamela Reid, vice president of the American Society for the Prevention of Cruelty to Animals, said in a 2017 Today interview, "Pit bull-type dogs are more likely to end up homeless, and owners of pit bull-type dogs face housing restrictions and other repercussions of breed-specific legislation. As a result, pit bull-type dogs are the most at-risk population in shelters today, and in many communities, shelters take in more pit bulls than any other type of dog."

In Lakewood, Charlie, a pit bull, became a news sensation when he was ordered to leave Lakewood when he got loose. His plight propelled the “I’m with Charlie” and “All breeds Lakewood” movements. Since 2008 Lakewood had had a breed-specific ban that included pit bulls and canary dogs. On March 2018, the city council voted unanimously 7-0 overturning the breed-specific ban in favor of a breed-neutral, safety-focused, dangerous dog ordinance.

On Nov. 12, 2019, Lester’s case was brought to Rocky River Municipal Court. Both dogs’ owners described the traumatic changes in their lives since the dog bite incident.

Judge Brian Hagan found Lester’s owner guilty of “harboring a dangerous and vicious dog.” He will pay a fine of $250 and a restitution of $188.44 for the veterinarian bill. Lester is removed permanently from Westlake (he had been relocated to a different county since October). Wherever he lives, the local dog warden will be informed of his “dangerous dog” status.

Judge Hagan admitted he had never had a dog and quipped that his brother-in-law might have gotten two Dobermans “just to keep [the judge] out of his house.” After listening to both sides’ concerns, he concluded, “In a neighborhood, channels of communication can be opened without getting upset. Bring it up and address it. Don’t let it fester.

“I pray for everybody in that neighborhood that there’ll be healing. It’s done.”