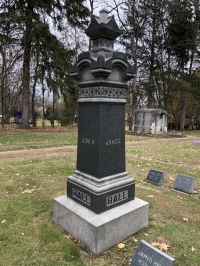 Maple Ridge Cemetery on Columbia Road in Westlake originally started as the Hall family cemetery and Columbia Road was known as Hall Road in Dover.

Part one of a two-part series.

Margaret Manor Butler wrote “Romance in Lakewood Streets,” published by the Lakewood Historical Society in 1962. In the book she states that Detroit (Detroit Avenue in Lakewood, Detroit Road in Westlake) “was the original Indian path heading to the city of Detroit, an important settlement of the French during the French and Indian War.”

As for Hilliard (Hilliard Road in Lakewood, Hilliard Boulevard in Westlake) she states: “New York lost a keen teacher but Cleveland gained an enterprising business executive when Richard Hilliard came to the Western Reserve in 1820. Starting in the wholesale dry goods and grocery business, he expanded his interests to land speculation. Among his purchases was one hundred acres in the vicinity of Hilliard Road at Madison [Road]. Although we have no record of his having lived in Lakewood, the street was named in his honor. He became one of Cleveland’s most outstanding citizens, serving as Mayor of the Village in 1830, and as an organizer or trustee in many civic ventures. He built a mansion on the present site of Cleveland Public Auditorium, where he resided until his death in 1856.”

Butler also describes many of the short streets in Lakewood as named by real estate developers or owners of the land who wished to honor relative or friends. Whenever I drive by Jackie and Kimberly lanes off Westwood in Westlake I imagine two 50-year-old women who probably still love their father.

Westwood starts at West 208th Street in what is now Fairview Park and extends westward, presumably to the “west woods” in Dover Township.

As per the book “Bay Village: A Way of Life” by Kay Laughlin, Bradley Road is named for Dr. Jason Bradley, who "bought the northwest corner of North Ridge (Detroit Road) and the road which was eventually to bear his name.” Bradley, a longtime physician in Dover Township, purchased some of the land on what is now Bradley Road from Barnabas Hall in 1850.

Clague Road is named for Robert and Margaret Clague, early Dover residents whose descendants donated the family homestead to create Clague Park in Westlake. Cahoon Road is named for the Cahoon family who did the same in Bay Village. Bassett Road is named for Nathan and Martha Bassett, early settlers of what is now Bay Village. The section of Bassett Road between Detroit Road and Dover Center Road was once known as Dutch Road for the German (Deutsch) farmers who settled along it and later Elbow Road because of the right angle turn that it makes where St. Ladislas Church is now located.

Clemens Road is named for Eli Clemens who once owned most of the land on either side of Cahoon Road from Detroit Road to the railroad tracks. Schwartz Road is named for the Schwartz family of Dover and Avon; a circa 1873 Schwartz home still stands at 3509 Bradley Road. Columbia Road, once known as Hall Road, was re-named for continuity along this state route from Bay Village to Columbia Station.

William R. Krause, AICP I am the Assistant Planning Director for the City of Westlake. I have worked for Westlake for 30 years. I served on the Bay Village Planning Commission for 5 years. I was a member of the Reuben Osborn Learning Center Steering Committee. I was a Board Member and Historian for the Westlake Historical Society and am a Trustee of the Western Reserve Architectural Historians. I have been married to Debra for 38 years and am the father of three grown children, grandfather of three and owner of a Shih Tzu.