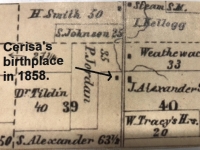 1858 Dover birthplace of Cerisa Alexander Winslow on Clague Road just west of Stoneybrook Drive in what is now North Olmsted, as depicted on a Hopkins plat map from 1858.

An addendum to part five in a series on the "real photo postcards" (RPPCs) of early 20th century Dover, now Westlake and Bay Village.

[Note: the address was given incorrectly as 2940 in the last article about this house (“Part 5”).]

Cerisa Alexander was the granddaughter of Dover pioneers James and Hannah Alexander. Her parents, Silas and Harriett, were married in Cuyahoga County in 1834. Cerisa was the ninth of their 10 children. Alexander Road in North Olmsted is named for the family.

In 1883 John Winslow Sr. dies and wills 8 acres on the west side of Dover to George. In 1890 George builds the house that is the subject of this article on the land he inherited. He is elected a Dover trustee from 1899 to 1909.

The house was placed on the Ohio Historic Inventory in 1977. It is described as incorporating various forms of the Queen Anne style. “A two-story bay is topped by a projecting gable on the side elevation. It has a sunburst motif found also in the gable over the main entry. A broad veranda runs across the front façade. The sunburst is repeated in the panels of the door. The gables have bargeboards carved with diamonds.”

On Oct. 29, 1902, George Winslow (47) marries nurse Jennie Cousins (47) of Lakewood. On the marriage certificate she is listed as having been born in Dover, Ohio, and as having been adopted and never previously married. When the picture for the RPPC (real photo postcard) is taken about 1910, the home is no longer that of George and Cerisa but actually the home of George and Jennie!

In a 1904 Cleveland directory Cerisa Winslow is listed as a widow of George and she is living on Clark Avenue in Cleveland. The stigma of divorce was real in 1904.

On March 16, 1907, the 28- year-old John Winslow married Edna French of North Olmsted. By the time of the 1910 U.S. Census they are living in Elyria. He is listed as a shipping clerk in a tube mill and they have one child, Beryl.

In 1910 Dermott is living in a house on the Winslow “farm” acreage near North Olmsted and working for his father, George, on this land which is identified as a truck farm, so called because fresh vegetables are “trucked” directly from it to the city.

Cerisa Winslow died Oct. 29, 1911, with a will that states that she lives in Cleveland and she leaves $1 to her “husband” George and $1 to each of her sons John and Dermott. To her youngest son, George Arnold Winslow (a 12-year-old who still lives in Dover), she leaves everything else. She makes “her husband” George the executor of her estate though the probate court said she died with no husband. What happened with this woman that she doesn’t even have custody of her youngest son?