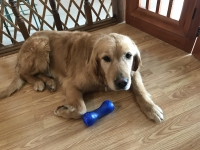 Allow me the privilege of introducing you to my new friend, Jackie.

She is unable to speak. Jackie is a sweet 6-year-old golden retriever from Golden Treasures Rescue. Many others like her have shared a similar journey.

When I first met Jackie her head hung very low and tight, she drooled, constantly circled and panted. Jackie was not willing to wag her tail. When introduced to others she would shy away. Extremely skittish. she clearly was a breeding mom from an Ohio Amish breeder.

Jackie represents  the 1.6 million dogs that are adopted in the United States each year. Jackie is one the lucky girls that was removed from one of the American puppy mills. Numbers provided by the Puppy Mill Project estimate there are 10,000 (licensed and unlicensed) puppy mills that exist  in our country. Over 2 million puppies are bred in mills each year. An estimated 1.2  million are euthanized in shelters each year. This slogan circulates the internet and has even appeared on advertising boards, especially in Ohio: "Adopt, don't shop" for your next pet.

Now with some pet owners unsure about their futures, fears and misinformation about COVID-19, the euthanasia number is on the rise. Animal clinics that might only euthanize one companion animal every two or three days are putting nine or more animals down a shift. Their freezers are full.

During this current COVID-19 crisis some shelters have been lucky to empty out with the exception of medical cases. Discussions are plentiful on how to address the upcoming need to catch up with spaying and neutering as kitten and puppy season is here!

According to the American Veterinary Medical Association there is currently no evidence that companion animals, including dogs, can spread COVID-19 or that they might be a source of infection in the United States.

There are many pet rescue groups, like some shelters, who are at a standstill with adoptions and unable to assist many pets in need.

Have a plan for your pets. Ohio law allows for last directives in wills and estate planning. Reputable rescue organizations have written in their adoption contracts a clause to return pets to them. Some municipalities provide programs to monitor senior citizens. Documentation with most of these programs includes pets in the home and emergency contacts. Please consider having detailed instructions visible on a refrigerator or in multiple places in your home in the event of an emergency.

Now to conclude with the update on my new gal pal, Jackie. It has been two weeks and she now picks up toys, joins in on affection, loves being brushed and praised. She is relaxed as she watches life go by out the door. Jackie now wags her tail and she snores at night! She circles less from being confined in a box and enjoys being a member of a pack of other throw-outs and misfits.

Please remember to adopt and not shop! Please don’t pass up on adult or senior citizen pets like Jackie and others. The fun and love can be very fulfilling.