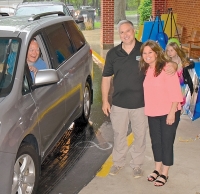 Cars line up for a surprise “drive-by farewell” to Chief Mark Spaetzel and his wife, Chris, at Avon Lake United Church of Christ on May 29. Photo by Denny Wendell

If you know the Bay Village Chief of Police, Mark Spaetzel, then you know he is a thoughtful, caring and diligent father, police officer and chief. After 35 years with the Bay Village Police Department, Mark Spaetzel is retiring. Since we can't have what would be a large party of family and friends the least that should be done is to note a little about his life and achievements.

Born in 1963 in Lorain, Ohio, Mark's family has lived a long time in Avon Lake. Not only did he grow up in Avon Lake and go to school there, his grandmother was in the first class to graduate from Avon Lake High School. His father, Richard, and mom, Dorothy, are both still living in Avon Lake and very proud of their son. Police work is in the family: his grandfather, Ed, was part-time Avon Lake officer, while his brother Steve is a Lakewood police officer and a cousin is also a policeman.

After graduating from Avon Lake High in 1982, he went on to earn a degree in Police Science from Lorain County Community College. The Bay Village Police Dept. called in 1985 and Mark was hired by Chief Bill Gareau. Within two years he was appointed training officer, which was a real honor. Subsequently he was appointed an instructor to train other officers and learning and teaching self-defense. In October 1993 he was made sergeant and was sworn in as chief on Nov. 1, 2013.

Asked what was most special in his work, he said every day brought something different. Detective work brought crimes like homicide and rape, and solving these was important. However, getting to meet and help people, relating to their needs and trying to help them though problems was the most special part of his years of service. Each new career move brought something new to learn and do. Also he has 100% support from his wife and family, and the department has been like family.

Years ago a young police officer came to this writer's house (in uniform) and knocked on our door to "check us out." His wife and mine had been elected to co-lead the Girl Scout troop our daughters were joining. I was startled but glad to invite him in. Over the years I have come to know Mark as very thoughtful, insightful, sensible and genuinely caring.

I asked him how he saw himself as chief and what qualities he thought a chief should have? He answered he sees lots of gray, not just black and white in law enforcement. He believes an officer needs empathy and understanding of people's position and problems. He sees himself as having a servant mentality – helping others, saying: "A chief needs to be tough yet soft, quick thinking but deliberate."

I also asked if he had any comment about the case of Amy Mihaljevic, who was abducted from the Bay Square shopping plaza in 1989. He told me he is very disappointed the case has not yet been solved. He hopes there will be justice and closure for the family some day in the future. He was very firm in saying the case is not about him, but about Amy and her family.

A few years ago he gave me a tour of the police station, built in 2006, and we talked about its special features. This week I asked him about the experience of guiding the building process. He was appointed to be a liaison with the architects and builders. Mark was heavily involved in planning, decision making, doing his full-time officer duty and still attending every meeting, asking lots of questions, using department resources to determine direction the design should take. He believes our police station has been very successful and is considered by peers as well-built and well-designed with good facilities for the department.

Speaking to Bay Kiwanis just a few months ago, Mark noted drug abuse has gotten worse since the start of his career. Most crime today has some element of alcohol or drug use. He has seen many good people just taking a wrong turn. Some have gotten clean and later thanked the police for helping. When asked about how the pandemic has affected the department's ability to operate, he said, "Our officers are coming to work, doing their job, are well protected, and do not complain."

Technology has absolutely changed significantly. When the Chief Spaetzel first joined the force, they typed forms in triplicate. Today everything is computerized. Personnel use laptops and cameras. The department's annual budget is $3.2 million. Protective equipment is vastly improved, and there is much more equipment an officer is required to carry.

People have also changed significantly. Today, new hires are much more a part of the decision-making process. Ideas are free flowing. Hiring emphasizes decision-making and the brand of the department. A good deal of thought has to go into seeking and selecting officers.

When Mark was hired in 1985, 300 officers might answer an ad. Today it might be 10-15. Leadership spends lots of time meeting the public and promoting the department as a solid place to work. Today's officer is the leader at the scene. Leadership is part of career path training. Mark is rightfully proud of 35 years with great people in a great department. He has worked in transitioning new Chief Kathleen Leasure and has great confidence in her ability to lead.

What is next for the chief? Mark has not decided his next steps other than to be active. I hope you take the time to thank him and the other officers that dedicate their service to helping others and wish Mark the very best moving forward.