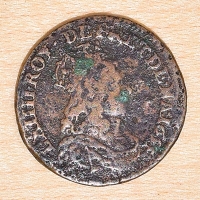 The obverse side of 7/16" diameter French coin found on Henry Road in Bay Village by Jack Dianiska. Photo by Denny Wendell

Jack Dianiska has lived in his Henry Road home behind St. Raphael’s for 60 years. He contacted the Observer after the first Digging Dover column about Native American relics found in Dover. He had several incredible stories to tell.

He was excited to read about the stone mortar that was found along Cahoon Creek, uncovered when the former Zipp’s manufacturing site was being cleared for the Cahoon Ledges cluster development. What he was excited about was that he found a stone pestle in the same location at the same time! The pestle and mortar would have been used to grind nuts.

Mr. Dianiska wondered if the man who found the mortar – which I've only heard about but haven't seen – had ever contacted me. He hasn’t. Later, when Mr. Dianiska and I met (with masks of course), I was able to hold the pestle and it had the same finely crafted balanced feel in my hand as the stone celt mentioned in the first article. He also found a grooved stone ax in the dirt pile. Both the pestle and the ax were dated by an expert in stone tools as from the Early Archaic period.

The pestle and ax are made from the same hard, gray stone as the celt from the previous article. Archaeologists surmise that grooved axes and celts were probably companion tools used in the construction of wood framed dwellings. These tools became common 7,000 years ago. In the same pile of dirt Jack found shards of Native American pottery that come from a later period.

Mr. Dianiska has explored Cahoon Creek for artifacts for years; one of his beautiful finds was a white barbed point that the same expert mentioned above said was used for impaling fish. As a lifelong bow hunter Jack’s admiration for the artistry and skills of these Native American craftsmen was palpable.

After graduating from John Marshall High School in West Park, Mr. Dianiska worked for house building brothers Alex and Henry Bruscino. It was Jack’s job to make sure that truckers leaving the brothers' post-WWII pre-fab house factory in West Park were not pilfering materials. He also worked for them in Bay Village.

According to “Bay Village: A Way of Life,” in 1950 the Bruscino Construction Company came to the aid of the rapidly expanding St. Raphael Parish by building a gymnasium which could be used temporarily as a church and in 1953 breaking ground for the now recently demolished permanent church building. It sounds like the Parish was “land rich and cash poor” and apparently for constructing these buildings at the lowest possible cost for St. Raphael’s, the parish gave or sold their backland east of what would become Donald Drive to the Bruscinos. According to Jack Dianiska, Henry Road was named for Henry Bruscino and the identical pre-fab houses were constructed and sold for $19,000 each.

This is where the other incredible artifact find that Mr. Dianiska made comes in. In 1960, after a seven-year stint in the military, he purchased one of those Bruscino-made homes on Henry Road from the original purchasers. Shortly after moving in, remembering that after the basements were dug and constructed the dirt spoils would be pushed back against the foundations, he decided to do some digging in his front bushes.

What he found was a handsome Native American stone point and a heavily encrusted copper coin, within one foot of each other. After cleaning off the coin as best as he could he saw that the coin had three fleur-de-lis and the words “Liard de Fran__” on one side and the profile of a head on the other. He took it to a coin dealer who could not find an exact match but said it looked similar to French coins of the 1500s and the 1600s. Jack conjectured that the arrowhead and coin were probably once together in a small pouch which had fallen to the ground and disintegrated. This ignites the imagination.

Wischmeyer Creek bisects Henry Road just a couple hundred feet east of Mr. Dianiska’s front door. One possible scenario is that a Native American encamped near Wischmeyer Creek lost a couple treasured possessions, to be found 450 years later as treasure for another man.

The French were the first Europeans to explore Ohio. They were the first to trade with Native Americans for furs. The “Jesuit Relations” published by French Jesuits in what is today Canada are the first to mention the Erie Indians which gave their name to Lake Erie. They were missionaries to the Huron Indians in Canada. Eight of them were martyred by the Iroquois in the 1600s and canonized in 1930. St. Raphael Church had a side altar dedicated to these martyrs for many years. It is fitting that of all the places in Dover that a French coin from this period would be found it would be on land once owned by St. Raphael Catholic parish.