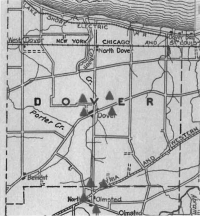 Mills' 1914 "The Archaeological Atlas of Ohio" shows four of Dover Township's burial mounds near the intersection of Dover Center and Center Ridge roads, and a fifth at Dover Center and Lorain roads in today’s North Olmsted.

Today, the nearest existing Native American earthworks to Dover are the Fort Hill Earthworks in the Rocky River Reservation. They are believed to have been constructed by what is known as the Early Woodland Indians over 2,000 years ago. They are a set of three long earthen walls and ditches built on a shale cliff 90 feet above the Rocky River. Before part of Dover Township split off to become North Olmsted, the southern boundary of Dover was the current location of Brookpark Road. This places Fort Hill less than a mile south of the old Dover Township line.

The “Archaeological Atlas of Ohio” compiled by William C. Mills and published in 1914 by the Ohio Archaeological and Historical Society (precursor to today’s Ohio History Connection), shows that there were five known Native American burial mounds identified within Dover Township. This is more identified burial mounds than any other township within Cuyahoga County except for Newburgh Township (which had nine).

The 1904 United States Geological Survey of the Berea Quadrangle (which includes Dover Township) does not indicate any 10-foot or greater rise in grade in the vicinity of Dover Center and Center Ridge roads, except where the street itself is located on an old beach ridge, and one oval-shaped 10-foot rise approximately where today’s U. S. Post Office building is located.

This means either the burial mounds were less than 10 feet tall in 1904 or had been destroyed already. Since they are not mentioned anywhere else I could find in the historical record it is likely that they were plowed over by then. The 10-foot rise on the post office site is too close to the intersection in comparison with the Mills map.

Because the symbols indicating the burial mound locations are so large in relation to the scale of the map, a scholarly evaluation of the Atlas in 1984 states that they cannot be used to determine the exact location of the sites. However we will try.

The northwest mound location appears to be approximately where the westerly drive to the new Westlake Intermediate School parking lot exits onto Bassett Road and the northerly adjacent athletic fields. When the Westlake Public School district was notified, they were not aware that any burial mounds had existed on their land and no archaeological survey was done before the recent improvements.

The city’s later Geographical Information System contour map layer shows a 10-foot mound once existed behind 27815 Berringer Run in the Capel Vale subdivision, approximately where the new retention basins for the intermediate school are now located. Because this mound did not appear on the 1904 USGS map it probably was just more recent dumped construction spoils.

The southwest of the four mounds may have been located approximately along the south property line between Our House (27633 Bassett Road) and the rear property line of property purchased by Westlake United Methodist Church and recently used for their parking lot expansion. Westlake’s contour map layer shows a small rise there. This area remains undeveloped.

Our House is located on property at the west end of Seneca Drive. Suddenly the choice of the residents on that street to rename it in 1956 from Johnson Court to the name of an Indian tribe makes sense. Have lots of Native American artifacts been found here through the years? They probably have. This may be the source of many of the Pease collection artifacts mentioned in a previous article since members of the Pease family owned property along Johnson Court – including the house at the northwest corner of Seneca Drive and Dover Center Road, once owned by Russell A. and Lora Pease (that house was featured in a two part “Digging Dover” article).

Work on the Archaeological Atlas began in 1894. This was a response to the recognition that these earthwork monuments in Ohio were being obliterated at an alarming rate. There is no published information on the source of the data on the map so the mounds still remain an intriguing mystery.