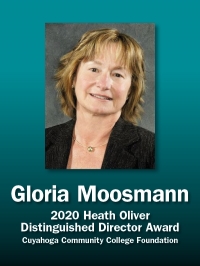 The Cuyahoga Community College Foundation board of directors awarded its 2020 Heath Oliver Distinguished Director Award to Westlake's Gloria J. Moosmann in appreciation of her exemplary service to the College and its students.

Moosmann led the Foundation for 16 years while serving as the College’s vice president of development, overseeing a period of unprecedented fundraising growth that continues to benefit Tri-C students.

During her tenure, she helped secure more than $227 million for scholarships and programs. The Foundation’s endowment grew from $4.6 million to more than $55 million over that same time with the generous support of donors Moosmann helped cultivate.

“I am truly honored and humbled to receive the Heath Oliver Distinguished Director Award,” Moosmann said. “Heath was my mentor and dear friend. I admired his strong passion and commitment to our students and am proud to have had an impact on building the legacy of the Foundation, just as Heath did.”

Moosmann’s work with the Foundation capped a career at Tri-C that began soon after she enrolled at the College. She worked as a student assistant to Tri-C’s first president, Charles Chapman, before earning an associate degree.

She went on to serve Tri-C in a number of roles before assuming leadership of the Foundation.

Moosmann first served on the Foundation’s board from 1988 through 1996. From 1999 through 2015, while she led the Foundation, she was an ex-officio board member.

She was reappointed to the board in 2016 and currently serves on the Committee on Directors and the Development Committee. She continues to serve the College as a special adviser to Tri-C President Alex Johnson.

“Gloria continues to contribute her financial and intellectual resources to the mission,” said Megan O’Bryan, president of the Foundation. “She has shown ongoing, significant passion and engagement to provide continued support for Cuyahoga Community College, its students, the Tri-C Foundation and our community.”

The Heath Oliver Distinguished Director Award was established in memory of longtime Foundation board director Heath Oliver, a valuable member of the Board from 1988 until his death in 2009. Under his leadership, scholarships for Tri-C students became a fundraising priority; the Foundation successfully launched its first major gifts campaign; and Presidential Scholarship Luncheons raised significant dollars to benefit students.

The Cuyahoga Community College Foundation, chartered in 1973, is a charitable organization with the mission to secure funding for scholarships and educational program development and enhancement for the College.