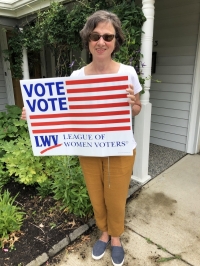 Jane Blackie, outside her home in Bay Village. Photo by Bill Blackie

First in a series of articles that aims to inspire readers to take the risk to try something new, see the positive in life, and recognize that everyday people can make a difference by following their passions.

During this pandemic, many of us have struggled to stay positive and motivated. Therefore, let us look to role models to inspire us. Jane Blackie, chair of the Bay Village Chapter of the League of Women Voters (LWV) is one who could serve as a role model for us all as she is one of those inspiring people making a difference during these unique times.

The League of Women Voters is a non-partisan organization, formed 100 years ago in conjunction with the suffrage movement.

“Once women earned the right to vote, the League was formed to educate women on how to vote,” Jane told me. Today the League’s mission is to empower all voters and defend democracy. Many men are involved and welcomed to join. You can learn more on their website, www.lwv.org.

When I asked Jane how she became chapter chair, she joked, “I’m the person that didn’t step back.” But in reality, chairing our local chapter is a natural fit for Jane.

Jane explained: “Many years ago, when I didn’t have time to volunteer, I attended one of the LWV’s forums. I thought, 'this is a great resource; no one does bi-partisan. When I retire, I’ll get involved.’” Years later, when Jane retired from her career as an English teacher at Lakewood High, she followed through on her commitment to join the LWV’s Bay Village Chapter.

Over the past eight years, she spent three years volunteering on the LWV of Greater Cleveland board as outreach director. “This experience gave me a better understanding on how the entire League works at the county, state and national level as well.”

As a high school teacher, Jane was trained in a program called “Facing History and Ourselves.”

“It is a phenomenal program that educates teachers on how to teach tolerance,” Jane said. She adapted her English lesson plans to talk about issues of race, gender and bullying long before those topics were popular. The program emphasized being an “Upstander” vs. a “Bystander” and how to take a role.

“I’m a firm believer in that,” Jane emphasized. Lotte Scharman, former president of the national League is quoted as saying ‘Democracy is not a spectator sport.’ And Jane believes, “All politics are local. That is where politics start. LWV is a great way to become informed.”

Jane was raised to get involved and make the world a better place. Her parents and grandfather role-modeled that behavior; for example, her grandfather was the head of the St. Vincent de Paul Society. She stated her spiritual upbringing in the Catholic Church had a big social justice component as well. “All those things worked together.”

As for Jane’s leadership style, her humbleness shined through. When I wanted to ask questions regarding her accomplishments, she kept emphasizing the valiant efforts of the members. “I feel I am standing on the shoulders of giants," she said. "I’m just the facilitator for the all the talent in our chapter. I’m trying to ensure peoples’ great ideas get implemented.”

Then Jane proceeded to give credit to many members for their outstanding efforts. “While serving as former chairs of the Bay Chapter, Barbara Ebright, a smart lady with a great sense of humor, Claire Banasiak and Conda Boyd all attended City Council meetings for years. Conda Boyd worked to ensure the Bay Chapter funding of the audio system that allows community members to listen to these council meetings to stay informed.”

Jane is most proud of the League’s involvement in passing Issue 1 which related to redistricting. As Jane emphasized, “It works for the voter not a political party.”

From her volunteerism, Jane has learned, “The things we fight for take time. You must start somewhere and work incrementally. You can’t stop. People get discouraged, but you can’t stop.”

Jane confessed, “We are living in frustrating times. I, too, get discouraged. But there are a lot of positive things you can do. When I get frustrated, I do something for the League or I try to help out our children and grandchildren.” Jane also serves as an adjunct professor and tutor at Tri-C. She ended with the comment, “If you do something for someone else, you get more out of it.”