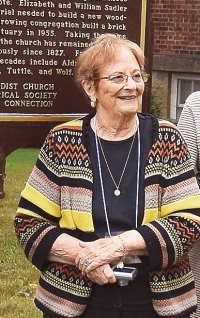 Kay Laughlin, pictured in 2018 at the dedication of the Bay United Methodist Church historical marker that she helped procure, died on July 25. Photo by Denny Wendell

A 1955 Bay High graduate, she received a distinguished alumni award from Bay High School in 1978. Kay got her bachelor of science degree in education at The Ohio State University where she met her husband, Jerry. She was a member of the Alpha Delta Pi sorority.

Along with her sister, Gay, she wrote “Bay Village: A Way Of Life” in 1974, the first written history of the town. In 2007, Kay and Ginny Peterson compiled the picture book, "Bay Village," collecting the pictures and writing the content. Kay joined the Bay Village Historical Society in 1968 and served as president for two years in 1976. She was part of the team that opened Rose Hill Museum in 1974. She was a docent for 20 years at Rose Hill Museum and became the society's historian. She was the manager of the historical society antique show, accessions chairman for 10 years, and one of the organizers at the Osborn Learning Center when the Reuben Osborn house was moved into Cahoon Memorial Park.

For years she presented slide shows of Bay Village history, starting with the lighted school house and the Reflections program at the Bay Middle School. Today Bay Village history is taught in the Bay Schools because of Kay and her sister. She was a past president of the Alpha Delta Pi West Cleveland Alumni Association, served on Normandy PTA for 10 years, and was the Bay United Methodist Church historian when they received an Ohio historical marker.

Kay begin writing her "Snippets of Bay Village History" column in the Observer in 2015, penning more than 100 articles. All are archived online at wbvobserver.com/read/columns.

Kay was a great cook. She set a beautiful table. She loved to read and listen to music. She would say being on the water was her favorite place. She and Jer loved their boat and Kay was a great perch fisherman, many times catching the most fish. She was an avid Cleveland sports fan, loving her Brownies.

For 15 years she did tole painting and worked shows in the area. She took up watercolors, painting the family dogs, cats, and horses. She loved being outdoors and could name every flower and/or weed. She could tell you the artists and names of the songs her children played in the 70s. There wasn't anything she couldn't do. She was the organizer and family tour guide. Her family meant everything to her. She loved Christmas and Thanksgiving dinner was her favorite meal.

“Kay was an amazing asset to the historical society and a pleasure to work with,” President Cathy Flament said. “We have all lost a loyal friend. She will truly be missed.”

A celebration of life will be scheduled at a later date to ensure safety for all who would like to attend.