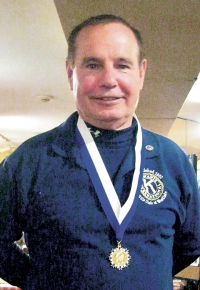 Rick Grane was recognized in 2018 with a George F. Hixson Fellowship for his significant contributions to the Westlake Kiwanis Club.

There are special people that make the world a better place. Rick Grane, a Westlake super volunteer and recent nominee for the “Real Men Wear Pink” campaign of the American Cancer Society, is one of those people.

After experiencing a TIA (mini-stroke) last year, Rick’s tests came back all normal. Using his humor, Rick immediately insisted his doctor raise his right hand and swear to his daughter, Laura, his “police partner in crime”, Marian, and his friend Timmy, “I hereby state that Rick Grane is completely normal.”

Rick is anything but normal! There’s a reason he’s received an abundance of awards over the years including Mr. Westlake 2014, Auxiliary Policeman of the Year twice and the Fraternal Order of Police Associates (FOPA) member of the year for Ohio, to name a few.

Rick graduated from Strongsville High School, pursued a business management degree while wrestling at Ohio Northern University before beginning his long, steady career in industrial sales. “I’m not one for change,” says Rick. Yet the world had different plans for him.

Three months short of age 50, Rick lost his wife after a 16-year battle with cancer. That was not the only major change. Rick also lost his mom, dad, sister, aunt and uncle to cancer and Alzheimer’s disease.   “All needed care. My wife alone had three surgeries throughout her battle. I did it alone. I know what it’s like. I never want anyone else to go through what I went through alone,” says Rick. After his wife’s death, he quit his job and channeled his gifts to help others.

“I was so used to helping people, it came second nature. It was therapy for me.” Since Rick was a member of FOPA, his buddy suggested he volunteer for the Westlake Auxiliary Police.  He immediately got the job with his outstanding record of zero traffic tickets and stellar neighborhood check.

“Rick does everything. Cool guy. Crazy, but will bend over backwards for you,” said his neighbor.

“After my wife passed, friends and family would call me for advice. One thing led to another and I just went with it,” says Rick. “I signed up with several organizations like the American Cancer Society. Before you know it, I was jumping from project to project either running it or helping out behind the scenes.”

Rick’s volunteering started earlier as a Key Club member in high school. “I was raised to believe, if you are going to be a part of something, you’ve got to do your fair share,” says Rick.

But Rick is known for giving 110%. He believes his drive, his ability to get people to work together, and his humor enables him to get the job done. He ranks humor as the #1 quality.

“To have been through what I’ve been through, if it wasn’t for humor, I’d probably be off a bridge,” admits Rick. “It’s keeps me going, keeps my mind running and helps me to forget a lot of things. But most importantly, it helps people to know that they are not alone.”

Rick is blessed to have a wonderful support system. He proudly talks about his 32-year-old daughter, Laura, and his friend and “police partner in crime,” Marian Zietz. “Between my daughter and Marian, they have been my crutch. They help me a lot. They kick me in the pants when I need it.”

Rick needed to end our interview as he was off to coordinate a hurricane drive and handle several other fundraiser campaigns. As he wrapped up, he added: “I have a lot of friends afflicted with many things. I help them and they help me.  It comes easy to me.  I am always surprised that something that takes me 10 minutes can make such a difference to someone else.”

Wouldn’t we all be so lucky to have a “Rick” in our lives.