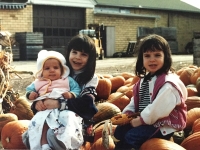 The author (middle) and her sisters sit among the pumpkins under the black walnut tree at Grobe Fruit Farm in 1995.

October’s Magical History Tour takes us to picturesque Grobe Fruit Farm in Elyria, a half-hour drive west on I-90. Covid-19 precautions include regular sanitation of surfaces, and both employees and customers are asked to wear a mask.

To some here in northeast Ohio, fall doesn’t officially begin until October, when a fat orange pumpkin is sitting on the front porch. In my case, that pumpkin comes from Grobe Fruit Farm, where the big pile of pumpkins around the black walnut tree in front of the farmhouse have been a family tradition since I was a child. For the Grobe family and their employees, fall begins at the beginning of September, with the harvesting of apples and making cider.

Fall on the farm has come to members of the Grobe family since 1905, when the then-potato and -dairy farm was purchased by Henry Grobe due to the soil quality. While the house was present at the time of purchase, the following century saw a variety of improvements and expansions: the apple orchard was added in the '20s and expanded in the '40s; the market was built in 1950 and the apple packing house in 1969; a commercial cider mill was added in 2007; and expansions to the packing house were made in 1999 and 2010.

A favorite fall tradition started in 1955, when Henry’s great-grandson James Grobe placed the first pumpkin pile around the same black walnut tree standing today. Photo opportunities, including “How Tall This Fall?” and the "happy pumpkin face" began in the '90s, when members of the family's sixth generation, Brett and Keith, were young children. When sharing the farm’s newest addition, a you-pick pumpkin patch, Brooke enthused, “We are so excited to begin this new adventure!” It is open Wednesday through Sunday, at Grobe's LaGrange location.

In addition to pumpkins and photo ops, visitors to Grobe Fruit Farm can find apples, cider and winter squash in the market, as well as gourds, Indian corn, and other farm-fresh favorites. The pumpkin pile will remain open through the end of October.

Throughout the years, my family has accrued many pictures from Grobe Fruit Farm. Under one of them, my mom included a quotation by Henry David Thoreau. "I would rather sit on a pumpkin and have it all to myself than sit on a velvet cushion and be crowded,” it reads, as we sit perched among the mound of knobbly orange squash, as leaves rustled overhead and the earth turned fiery red, yellow, and auburn in all directions.

This year, my porch is home to another Grobe Fruit Farm pumpkin, and now yours can be too. Whether or not you decide sit on your pumpkin of choice is up to you.