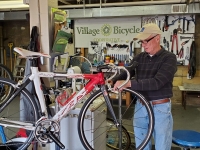 Bob Piccirilli works on a bike at the Village Bicycle Cooperative.

Are we ever too old to stop learning? Bob Piccirilli says “no!!” In fact, Bob is still “thrilled by the chase” of learning something new.

An avid learner, Bob earned his Ph.D. in chemistry from Clarkson University and completed his post-doctoral work at Duke University. After retiring in 2009 from a rewarding 33-year career with PPG, Bob wanted to continue his learning and make a difference. “I’m a task-oriented person. I knew I could never sit at home alone and watch TV, and I can’t golf in the winter,” says Bob.

Bob’s wife, Barb, suggested that he volunteer for the Bay Schools’ Citizens Advisory Committee (CAC). Bob found this group fascinating. “Each year the school board would give us a useful project requiring us to do extensive research, collect data and present our findings to the board.” Bob volunteered on the CAC for three years and served as chairman for one year.

Based on this experience, Bob was asked to run in a contested election for the Bay Village school board. At age 64, he won and served a four-year term. “It was such a rewarding experience. No one had an agenda. It was all about the kids. It felt good to give something back.”

Volunteering for the Bay Schools utilized Bob’s management skills. However, Bob admits, “I’m a chemist by training, a manager by appointment. As a chemist, I enjoyed working in a lab setting up experiments and taking measurements. As I moved up into management, I missed the hands-on aspect of the job.” This led to Bob’s current passion.

Bob could fix many things, but he found it frustrating trying to fix his family’s bikes. Being a problem solver, he decided to research bike repair and discovered Ohio City Bike Co-op. He took their classes and learned how to fix bikes. Jim Sheehan, the owner of Ohio City Bike Co-op, referred Bob to Jennifer Smillie, who was thinking of starting a bike co-op in Bay Village. “Jennifer had a marvelous threefold vision,” Bob says, which was to:

In 2012, the Village Bicycle Cooperative was founded. “We formed a board including Jennifer, Carl Gonzalez, Patrick McGannon, and myself. We pulled together some tools and started in the old building where Pizza Hut is now located. We began refurbishing and selling bikes at a reasonable cost to pay the rent and to buy more tools. In 2013, we moved to the ground floor of the Community House. In 2014, Village Bicycle Cooperative won the Bay Village Project of the Year award.” says Bob.

“Most of our volunteers are mechanically inclined and find this a rewarding outlet. To learn to put together that first bike from scratch – that’s a jolt!” says Bob.

“Through our Fix it Forward program, we’ve donated over 450 totally refurbished, safe bicycles to kids and adults who cannot afford transportation to get to their jobs,” says Bob. “When they get a bike from us, they can be assured it's refurbished by an experienced mechanic who has been properly trained. We sell enough bikes to cover our costs, then donate the rest to those in need. To see the looks on a 10-year-old’s face when they get their very first bike of their own, it’s just spectacular! It’s something special. That’s my payback!”

“Biking is a great hobby. It’s wonderful exercise, especially for us ex-marathon runners whose knees have given out,” laughs Bob. Bob ran the 1993 Cleveland Revco Marathon and the 1995 London Marathon with his father-in-law and brother-in-law. Now Bob enjoys biking with other members of the Silver Wheels Cycling Club, golfing, and working at the shop.

When asked what the Village Bicycle Cooperative needs, Bob replied, “We can use help in all aspects. While social distancing prevents us from currently training new volunteer mechanics, we could use volunteers to help us market better. People still come in and say that they hadn’t heard of us.”

What does Bob hope to learn next?  “For the last seven years I’ve worked on a lot of the same-style bikes – the four or five kinds of brakes and gears for the bikes donated to us. I’m now learning more about complicated high-end bikes. I just finished tuning up my own bike.”

Bob’s thirst for learning never ends. May his story inspire you to try something new.