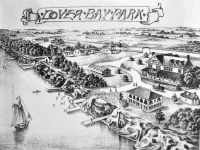 One would never suspect that the attractive French style home at 24715 Wolf Road (just east of Forestview) was once a Shingle-style summer cottage on Lake Erie for the prominent Dodge family of Cleveland.

Douglas Dodge’s ancestor Samuel was a carpenter who built a barn for an early settler in Cleveland. The settler paid for the barn with land instead of cash. Land on what would later become Playhouse Square. This helped make Samuel Dodge’s descendants wealthy. East 17th Street was once known as Dodge Street and there is still an alley named Dodge Court behind the theatres.

Douglas Dodge’s name does not appear on any recorded land deeds in Cuyahoga County, though his name does appear on a lawsuit his family filed against the City of Cleveland regarding their downtown land. It appears that he may have preferred golf to land ownership. Douglas' ownership of the cottage is based on information in the Bay Village Historical Society archives and their book “Bay Village: A Way of Life.” He is listed as one of the organizers of the Colony and a golfer. The names that do appear on the Dover Bay Park Association land records include Washington H. Lawrence, Myron T. Herrick and James Parmalee, other important Clevelanders of the Gilded Age.

Myron Herrick, one-time governor of Ohio and U.S. ambassador to France, was Mr. Dodge’s summer neighbor at Dover Bay Colony. It appears that some of the cottage owners were permitted to construct cottages on the Park Association land without owning the land beneath them. In fact, the Park Association sold virtually all 33 acres of the park back to Washington Lawrence for $5,200 in 1892. One exception was a 40-foot by 100-foot parcel deeded to Myron Herrick by the Association on July 27, 1892.

According to an atlas published by George Cram in 1892, it was in the summer of 1892 when the cottages surrounding the Lawrences' original circa 1889 wood-framed cottage were first occupied by their illustrious owners. It is safe to say that the Dodge cottage was among those first cottages constructed in 1892 since it occupies the most desirable lakeside location. It may be the cottage depicted just west of the dance pavilion in the 1892 artist’s rendering which accompanies the article in the atlas, though the depiction does not exactly match later photographs. We have been unable to determine how long the Dodges owned their cottage.

In 1899 the brick-and-stone Lawrence mansion which we know today as the core of the Cashelmara development was largely completed. When Mr. Lawrence died in 1900 it was still partially unfinished. Descendants lived in it until 1948 when it was sold to the Sheppard family for conversion into Bay View Hospital.

By 1943 the dance pavilion which had been next to the Dodge cottage was gone. In 1951 the rest of the lakeshore property was split into lots for sale and a new wing was added to the mansion for the hospital. This may have been when the City of Cleveland obtained the land northeast of Clague and Lake roads. They eventually constructed a utility building in virtually the exact location that the Dodge cottage once occupied.

The couple who had the house moved were Russell A. Swanson, assistant city engineer for Cleveland, and his wife, Agnes. He probably saw an opportunity as a utility engineer when the City of Cleveland acquired the property and the cottage was destined to be demolished. He had the cottage moved the half-mile on Wolf Road to its new location next to Forestview school (since demolished).

A newspaper clipping at the time noted that some broken timbers and rain-softened ground resulted in the house blocking traffic on a busy Wolf Road intersection for a day. Once it made it to its new location, they gutted the interior and made dramatic changes to the remaining shell, transforming it into a stylish 1960s French-inspired home. They had front doors salvaged from a Euclid Avenue mansion and a dramatic curved staircase to the second floor installed. Once completed, the project was featured in articles in both the Cleveland Press and Plain Dealer in 1961.

An interesting aside in the Cleveland Press article was a note that Mr. Swanson painted as a hobby and was a founder of an arts organization with friends, one of whom was named Jo Lawrence. Could she have been related to the Washington Lawrence family who once owned the land underneath Dodge cottage? In an amazing coincidence the newest owners of 24715 Wolf also have the Lawrence surname! A more recent Plain Dealer article traces Washington Lawrence’s family to Robert Lawrence of Lancashire, England, who was knighted by King Richard I. Time for research on Ancestry.com!