What's in a name, anyway? 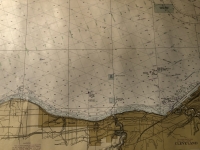 Our little slice of paradise from Avon Point to the Cuyahoga River as per a portion of the U.S. Department of Commerce, NOAA, National Oceanic Survey, Sandusky to Moss Point. Photo by Will Krause

As part of a new year, I would like to introduce a new column called “Westshore Wanders.” By definition a “wander” is an act or instance of wandering. “Wanders” is the plural form of the noun. To wander is to walk or move in a leisurely, casual or aimless way. There is something very relaxing about the word. Relaxing is something we could all use more of about now. To wander is to ramble, amble or stroll … ahhhh.

“Westshore Wanders” is also a play of words on “Westshore Wonders” as per the internet sometimes people confuse the two words wander and wonder. The bottom line is that there are lots of wonderful historic things in our little beachy slice of the Cleveland area.

“Westshore” is harder to define. And is it “West Shore” or “Westshore”? The former St. John West Shore Hospital is listed both ways on Google maps (the confusion has been eliminated now that it is known as UH St. John Medical Center).

The Westshore Council of Governments was established in 1971 between Bay Village, Fairview Park, North Olmsted, Rocky River and Westlake to foster cooperation between these municipalities in all areas of municipal services. The Westshore Central Dispatch opened in 2006 for fire and EMS and adds North Ridgeville but excludes North Olmsted.

In my mind, the Westshore area includes at least part of Avon Lake, all of Lakewood and the west side neighborhoods of Cleveland that abut Lake Erie along the West Shoreway (State Route 2) – Edgewater, Detroit Shoreway, and Ohio City. Maybe even the part of the Flats west of the Cuyahoga River including Whiskey Island? For the purposes of this column it will start at the Cuyahoga River and go west to Avon Point in the city of Avon Lake and extend far enough south to pick up part of Westlake.

The funniest part is that even though Westlake has “lake” in its name and is usually considered a significant part of the West Shore, even it doesn’t really have a shore, unless you count the perimeter of Clague Pond, Bunn Lake or the pond at the Recreation Center!

The Westshore area as I have defined it is one of the most dynamic in the Cleveland area considering the booming development along Detroit Road in Ohio City and the Shoreway near Edgewater Park, the renaissance in Lakewood and the continued strong demand for the West Shore suburbs. The Westshore suburbs along Lake Erie have been taking steps to make the shoreline even more accessible and inviting. Bike routes are being extended and improved to link the Westshore together recreationally better than ever.

The Westshore area as I have defined it is linked culturally. In America it is common for ethnic groups to migrate out away from the central city along the principal streets radiating from it. It is common for families that started out on the near west side to have moved out farther in Cleveland along Lake, Detroit and Lorain roads. For example, the Irish Catholic families that started at St. Patrick’s and St. Malachi’s in Ohio City migrated out to St. Colman’s then to St. Ignatius Antioch and now to St. Bernadette’s and other far flung west side parishes.

It is common for families of all ethnicities with roots in Lakewood to now live in Rocky River and Westlake and for those who grew up in Westlake to now live in Avon Lake. In the days of the Interurban railroad and streetcars a trip to the hinterlands was along one of their same radiating routes. Once the automobile came along city folk first came out to farm-stands in Westlake for their autumn apples and pumpkins and now they go to parts of Lorain County.

Note that Lakewood Cemetery is in Rocky River and Lakewood Country Club is in Westlake. I would guess that at least half of all Westshore families have had a family member that lived in Lakewood at some time during their lifecycle.

To me one of the advantages of living in the Westshore area is the proximity to Downtown Cleveland and University Circle via I-90 and the Shoreway. Those trips keep me connected to the other communities along the route. When heading west over the Main Avenue bridge seeing Lakewood's Gold Coast and the Bay Village shore in the distance, I feel like I am nearly home.