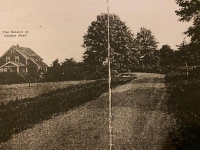 Circa 1925 photo of 966 Cahoon with MCT in front yard from sales brochure for the Dover Bay Subdivision. Based on the growth factor for pin oaks this 41.5" tree was actually only approximately 124 years old in 1946 when it was designated and 103 years old in this photograph. Brochure is part ot the Westlake Historical Society collection.

A second part to this series was needed to research one final previously designated Moses Cleaveland tree (MCT) on Cahoon Road. The records state that this tree, a pin oak, was somehow associated with a Mrs. Edward Jones.

We could not locate the original MCT card. Later, the tree was described as being at the rear of 1966 Cahoon Road in Westlake. Since, there is no 1966 Cahoon it seemed logical to investigate 966 Cahoon. The address was mentioned in a previous MCT article last summer and the current owners contacted the previous owners to see if a big tree had been cut down in the back of 966 Cahoon during their ownership which spanned from 1975 to 2002. Their answer was “no” but they said a big tree was cut down from the front yard by the city years ago. Legend was that the bend in the road at 966 Cahoon was originally created to go around this huge tree.

The 1940 U.S. Census records for Westlake Village were searched for both a Mrs. Edward Jones and information about 966 Cahoon Road. We found that 966 Cahoon was a rental property in 1939. The front part of the dwelling was rented to a Mr. and Mrs. Wealthy and their family. The rear was rented to a man named Valentine Beeman.

Deeds of ownership for 966 Cahoon could not be found as to who owned it in 1946 when the MCT trees were nominated for plaquing as part of a commemoration of the 150th anniversary of Moses Cleaveland arriving here in 1796. Helen Jones, wife of Alonzo Jones, had received the property from her mother, Magdalena Demand, in 1954. “Edward” Jones may have been another error in the MCT records and they should read “Mrs. Alonzo Jones”?

Dr. Arthur B. Williams directed the MCT project in 1946. He also wrote a fascinating report titled “Native Forests of Cuyahoga County” in 1949. It will hopefully be republished as part of the MCT project in 2021. In it he writes: “Of the oak and chestnut forests which claimed so large a place in what is now downtown Cleveland, little remains to suggest their former grandeur. Practically nowhere within the limits of the county does there now exist more than a few oaks of forest form and proportions to suggest the former lordly trees of these forests. In Clague Park, Village of Westlake, the remnants of such an oak forest may be seen.”

As for the rest of Bay and Westlake, Dr. Williams states that in 1939 a remnant native forest south of Lake Road consisted of a dense stand of pin oaks as well as red oak, white oaks and tupelo (sourgum) trees. He said that in our area were frequent isolated examples of large oaks of eight different varieties as well as elm, maple, tupelo, cucumber (magnolia), ash, hickories and remains of chestnut (which had been wiped out by blight). When Center Ridge Road was surveyed in 1811, along an ancient beach ridge, 15 trees were used as mile markers; 10 of these were beech trees, two were oak, and one each of ash, maple and whitewood (tulip tree).

Dr. Kathryn M. Flinn of Baldwin Wallace University co-authored a research article in 2018. She used all available field books from surveys of Cuyahoga County around 1800. From the field books she obtained the ranked timber observations recorded by the surveyors. The first listed tree species were plotted on a map which she shared. For Dover, the only observations found were along the eastern and western edges of the township.

The eastern boundary consisted of chestnut right at Lake Erie and then hickory extending south past what is now Detroit Road. Oak was first listed from south of Detroit Road to what is now North Olmsted.

The western boundary was oak from Lake Erie to Detroit Road and then beech from that point south to Center Ridge Road.

For most of the county beech-maple is the predominant climax forest in 1800. This is another reason that the remaining centuries-old oak trees in our midst are priceless.

Unfortunately, as of this writing the former Abby Sammon oak tree on Lake Road is destined to come down according to a distraught neighbor, because the current owners of the tree say it was diagnosed with carpenter ants.