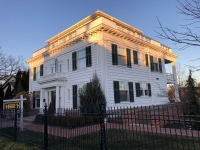 Current view of the southwest corner of the home, this view shows it is a Neoclassical block building form. Photo by Will Krause

On the cusp of the western cliff overlooking the Cleveland Yacht Club in Rocky River is a home that looks like it belongs in Boston or on the shores of the Atlantic Ocean. It is built in the form of a Neoclassical block. A pillared portico with two levels faces the Rocky River and a simple classical façade with a Palladian window faces Frazier Drive. A plaque on a pillar near the front door tells part of the story of this home. It was designed by the architectural firm Scaries, Hirsch & Gavin. It is fitting that the brick pillars that frame the front entrance along the sidewalk support a wrought iron fence.

The plaque states that the home was originally constructed for the James Van Dorn family in 1906.

According to William Ganson Rose in “Cleveland: The Making of a City” (under the year 1878): “James H. Van Dorn’s Akron neighbors admired the iron fence that he had designed to surround his home, and wanted fences like it. This led him to set up a small fence business that he moved to Cleveland … nearer major sources of supply and shipping facilities on the site of a great future plant. [He named his firm the Cleveland Wrought Iron Fence Co.] While waiting to turn in his bid for fencing a Milwaukee cemetery, someone mentioned jail cells, and he quickly realized that ‘jail cells are nothing more than fences built indoors.’ Jails soon became the principal business of the Van Dorn Iron Works Company. Stove manufacturers were having trouble with frame breakage, leading Van Dorn to master the art of metal fabrication. He made ornamental iron work, streetcar vestibules, bicycle parts, and metal office furniture. Van Dorn’s structural steel business developed through the interest of T.B. [Thomas Burton] Van Dorn, son of the founder.”

The structural steel was used in the five-mile crib providing Cleveland’s water supply. To this day, if the weather is clear, perhaps the orange painted crib in Lake Erie may be visible from the upper level of the portico on this house!

James H. Van Dorn died in about 1914 and the home remained in the Van Dorn family until 1940 when his son Thomas Burton Van Dorn, by then a widower, sold the home. The Encyclopedia of Cleveland History states that early on, the 1,100 employees of the Van Dorn Company supplied automotive parts for the emerging automobile industry in Cleveland and they produced tanks and armor plates for cars and aircraft during both world wars, but that the company suffered severely during the Depression. Could this have been one reason the home was sold out of the Van Dorn family on the eve of World War II?

According to the Encyclopedia of Cleveland History, the company began to diversify and in 1944 they acquired a can company and in 1945 they entered plastics manufacturing. During the 1970s and 1980s their container and plastics subsidiaries employed 2,200 people with their headquarters and four plants in Cleveland. By 1985 they had 19 plants in seven states, Puerto Rico, and Canada.

Van Dorn closed its primary Cleveland plant in 1991. In 1993, Van Dorn was purchased by another company and the plastics division was spun off to form the Van Dorn Demag Corp. In 1995 Van Dorn Demag employed 650 people in the Cleveland area. Today their headquarters still remain in Strongsville.

Tragedy struck in 1991, during the Ripich’s ownership, when fire destroyed the original home, including the fence! It was all rebuilt in 1993. The architects that designed the rebuild were Gaede Serne Architects and Larsen Architects. According to Jim Larsen the owners loved the house so much that they got their insurance company to rebuild the original house.

The problem was that there were no original drawings and everything was burned down to the brick base on which it once stood. Jim Larsen was called in by the owners to create a set of drawings for the original house – all the details, using photographs for guidance! Architect Bob Gaede took Larsen’s house plans and elevations and made some interior modifications to align with the new bathrooms and kitchen, the actual plan of the house didn’t change.

According to Jim Larsen, the huge plus was the builder, Bill Weisbarth, followed their directions on details, using craftsmen of like skills. Jim said the owners were very pleased with the results, hence the plaque.