Chop down that tree! 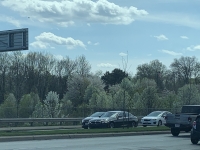 Invasive pear trees seen growing out of control at the exit of I-90 at Crocker Road in Westlake.

Are you shocked by the title? That I’m asking you to cut trees down? I wrote about this environmental problem two years ago and I’m returning to the subject again as spring is a popular time to plant trees.

My goal is for you to learn about the problem of the invasive pear trees and to then take action by cutting down pear trees that you have, encouraging friends and family to do the same, and then choosing native trees to plant instead of the pear trees.

Pear trees are everywhere right now – they are so noticeable in the spring because of their white flowers and symmetrical shape … however, if you’ve ever walked near one in bloom, you’ll know their flowers smell pretty gross. Please keep reading to find out why their stinky smell is the least of the problems with these trees.

Ohio put the pear trees on the invasive species list in January 2018. The Callery Pear was introduced in 1964 by the U.S. Department of Agriculture. American horticulturists started selective breeding these trees for stronger branches (pear trees have very weak branches) and shape. This is how we got the Bradford Pear, Cleveland Select, and Aristocrat. The tree is fast growing, low maintenance, have a nice shape, and produce beautiful spring flowers, which is why they quickly became a popular choice.

The pear trees were thought to be sterile, but as it turns out while they cannot reproduce with each other, they are capable of cross-pollinating with any other tree of the same species even if they are genetically different. As these pear trees kept popping up along forest edges and in wetlands, the environmental alarm started sounding.

Still, you may ask “what is the problem?” Pear trees are one of the first to bloom and one of the last to lose leaves, so they are crowding out native hardwood species such as maples and oaks. This is the biggest problem with them, as native trees are essential for biodiversity, and biodiversity is essential for the health of us (humans) and all plants, animals and insects. Second, when pear trees pollinate with other trees, they turn back into the Chinese Callery pear tree which has thorny thickets and are difficult to kill and get rid of. Pear trees only live to be about 20-25 years, and with their weak branches, they eventually become structurally unsound and unsafe. Lastly, the white flowers, while pretty, have a stinky smell.

What should you do? Cut your pear trees down. Yes, I’m serious. Just get rid of them now and plant a native species in its place. As with all of my columns, you alone can make a difference. Cutting down your one or more pear trees will help this problem. Your pear tree is cross-pollinating with other trees and spreading like wildfire. Just get rid of it and be a part of the solution.

Some cities are even taking extreme action. Lebanon, which is located in southwest Ohio, has cut down all of the city-owned pear trees and is encouraging residents to follow suit and plant native species instead. If you see small seedlings and saplings taking root, please pull them out.

What native species would be a good alternative? Please visit www.audubon.org/native-plants and you can enter in your zip code for lists of native plants. You can then sort by the type of plant you are looking for such as trees, shrubs, annuals, etc.

I did a quick search for our area and found a few trees that may be good replacements for the pear trees. The Allegheny Serviceberry, the American Plum, the Cock-Spur Hawthorn, or the Eastern Wahoo are all smaller, flowering native trees to our area.

Why not plant a Japanese Maple or some other ornamental type of tree? While those trees are not invasive like the pear trees, they are not native. It is important to plant native species as it protects our biodiversity. Alien ornamental species support 29 times less biodiversity than native ornamentals.

Local birds need insects to survive. Insects live on trees. Native oak trees have been found to host over 500 species of caterpillars; Ginkgo trees host only five. Keep in mind that it takes over 6,000 caterpillars to raise one brood of chickadees, and song birds are in decline.

In conclusion, cut down your pear trees, plant a native tree, and enjoy not only being a part of the solution and helping a bigger cause, but enjoy the biodiversity and song birds you just invited to your yard!

Read More on The Green Report