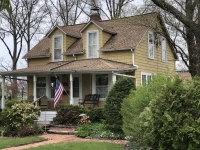 Once again, the Bay Village Historical Society is offering plaques to the owners of homes in the city that are more than 100 years old. The plaquing program was temporarily suspended because the Cuyahoga County Archives were closed due to Covid-19. Therefore, the tax records that verify the date of construction were not available.

The County Fiscal Office lists a year built on the online property records. But these dates are only estimated and are notoriously inaccurate. We are currently working diligently to verify the age of homes for which plaques were requested shortly before or during the pandemic.

The plaques, made of cast aluminum and colored black and gold, are 10 inches by 14 inches oval, and include the words “Bay Village,” “Century Home” and the year of construction.

The cost is $125, which includes delivery and a one-year membership in the Bay Village Historical Society. For more information call 216-386-5997.

Listed below are the results for three homes for which plaques were requested. It is obvious that all three are well cared for and loved by their current owners.

This substantial, dormered, Colonial Revival was listed as constructed in 1920 according to the County Fiscal Officer. However, a Hopkins Plat book for 1920 did not show a home on the parcel which extended 548 feet south of Lake Road. Perusal of the tax records showed the owner of the property as Walter C. Myers in 1923, with still no building value listed.

In 1924 the new home and garage on the parcel were valued at $6,940, the land at $3,760, for a total value of $10,700. At this time Mr. Myers owned the north part of the parcel with frontage on West Lake Road as well as the center and southerly parts of the parcel which fronted on both sides of Bruce Road once it was cut through. The garage, which may be the original one, is shown in the same location as the garage today with access off of Bruce Road.

One bonus at the County Archives was a photograph attached to the building card, probably taken in the 1950s. The building card states that a porch was enclosed in 1949 by the then owners David C. & Dorothy C. Nay. New owners purchased it in 1952 for $29,000. In 2023 the current owners will be eligible to purchase a century home plaque.

This charming vernacular home with over-sized windows in its little dormers sits among well-tended gardens on the northeast corner of Parkside Drive and Lake Road. While the County Fiscal Officer lists the date of construction as 1920 it is a bit older than that. It appears on a 1914 plat of the S. H. Kleinman Lake Erie Park Subdivision. The building card lists the date of construction as 1912 and a little more research is necessary to confirm that or perhaps an even earlier year that it was built. A 1903 map shows a home owned by M. Tuttle in the approximate location of the home at 281 Parkside today. However, since the home faces Parkside Drive it would be odd to not have the entrance face Lake Road if the house pre-dates Parkside Drive.

This home was in the Vanica family for 56 years, until it was sold out of the family in 2015. It was purchased by the new owners in 2020. Rather than just go for the contemporary farmhouse look popular on HGTV and many new houses in Bay, they have updated what looks like a real farmhouse. The house is in a gable wing form popular in the Western Reserve and has some nice original Colonial Revival features like half fan windows in the west facing gable on either side of the handsome brick chimney.

We have confirmed that the home was constructed in 1912 by Robert F. Pickering. He purchased a 2.6 acre parcel from Reuben and Eunice Osborn for $275 in 1911. The parcel he purchased was originally 177 feet wide and 645 feet deep. At one time, members of the Osborn family owned land all the way from Lake Erie to the north side of what is today Osborn Road. This Reuben was the grandson of the builder of the Reuben Osborn house which is now the Bay Historical Society’s Learning Center. The grandson Reuben was also the first mayor of Bay Village.

Robert Pickering owned at least one other home on Osborn Road around the same time and other property in the Cleveland area so it is not clear if he ever actually lived in this particular home. Sadly, he was declared a lunatic and was appointed a guardian in 1935 and the home was sold in 1936 for $2,736.