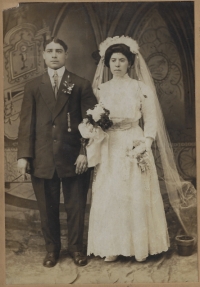 Frank and Lugene Vicchio on their wedding day in 1912.

Over 120 visitors converged on Rose Hill Museum on Sunday, July 25. All were impressed on the improvements that have been made over the last several years. Nearly $1,500 was raised for further improvements to the facility.

Apologies to the little lady whose wedding dress was on display. In the last issue of the Observer she was identified incorrectly. Her correct name is Lugene (Luigina) Vicchio. She was born in Santa Sophia, Italy, in 1891 and immigrated to the U.S. in 1911.

Lugene married Frank Vicchio at St. Anthony's Church in Cleveland on April 14, 1912. They raised their eight children in Cleveland before moving to Bay Village in their later years. The dress was donated to the Bay Village Historical Society by Sophie Vicchio in 2006. It continues to be on display in the Victorian Parlor at Rose Hill Museum.