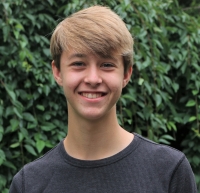 At the beginning of the pandemic with most of the country locked down indoors, Westside Christian Academy junior Nathaniel Shackelford took to the great outdoors. There he discovered a fascinating world of nature, quite literally in his own backyard. With his father’s camera a Canon EOS 70D, Nathaniel photographed an aerial battle between a red-tailed hawk and a crow. Sharing the picture from this encounter with his high school classmates elicited favorable comments and encouraged him to continue photographing birds.

Realizing that he needed a technological upgrade, Nathaniel used all his available cash to purchase the Sigma 150-600mm lens. With this new equipment, he has photographed over 100 species of birds, most in his Bay Village backyard. Other locations where he’s taken photos include the Rocky River Reservation, Sandy Ridge Reservation in North Ridgeville and Magee Marsh along Lake Erie near Oak Harbor.

While he’s encountered many bird species, Nathaniel has a special fondness for warblers: “They only pass through this area twice a year and are very colorful ranging from deep blue to bright yellow.” In addition to birds with striking colors, other popular species include birds of prey, especially hawks, and large birds such as the majestic great blue heron.

Although he concentrates on birds, Nathaniel photographs other wildlife as well including butterflies, snakes, and small mammals, as well as landscapes and flowers.

Following in an uncle’s footsteps, Nathaniel displays and sells his work in local stores like Java Bay coffee shop in Bay Village. And his work is also starting to be displayed at the Original Pancake House in Westgate.

A complete portfolio of Nathaniel’s photographs can be found at baybirder.com.