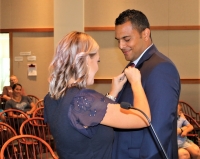 The City of Westlake welcomed Patrolman Zack Hitchens to the Westlake Police Department on Tuesday, Aug. 24. Mayor Dennis Clough administered the oath of office to the city's newest sworn officer in front of members of his family, friends and his new colleagues in the Council Chambers at Westlake City Hall.

Hitchens comes to Westlake having spent the last three years serving as a patrol officer for the City of Cleveland. Prior to that, Hitchens worked as a corrections officer for Huron County and Stark County.

He graduated from Kent State University in 2014 with a bachelor's degree in Criminal Justice.