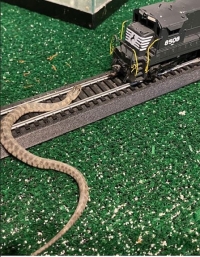 One of the snakes was found on the tracks of a model Norfolk Southern train in Kevin Davey's basement.

For those of you new to the story, over three days in August and September I captured five LIVE baby Northern Water Snakes in my Bay Village basement.

To "solve" the problem I tried a three-pronged "dummy's guide to snake removal" approach: flour on the floor to track any new snakes (I neglected to contemplate what I'd do if I found tracks in the flour, but no snake!), a minnow trap to catch snakes (with yummy, fishy-smelling baby snake food), and a rubber decoy snake to make any few snakes feel comfortable and safe (like the decoy gophers Bill Murray used in “Caddyshack”).

So I patiently waited for three days, and NOTHING happened! Either this mom snake gave birth to only five snakes (instead of the usual 30 to 90), or there might be dozens of snakes still in the basement, waiting to be discovered. I hoped for the former, but expected the latter.

The morning after I dusted flour all over our basement floor to track any potential snake movement, I went down to check on the flour trap. The good news is I did not find a single solitary "snake slithering through the flour" track.    The bad news?    I found FIVE track marks! Better yet, all these tracks were in different spots in my flour trap area. Does this mean one snake, who in 12 hours slithered all over 15 feet of my basement? Or maybe five snakes, with each staying in their own area? Ahhhh!   Now I HAD to find at least one snake, to keep my marriage intact and prevent my house from burning down (I swear I saw my wife dusting off a gas can in the garage). It took about 30 minutes, but I found #6 right where #1-5 all were! The rest of my Labor Day was spent hunting for more (because – again, let's keep this fact from my wife – there is no way I think this snake made all these marks, as he (she?) was pretty lethargic when I picked it up). Of course, maybe this snake was just tuckered out from racing around my basement all night.   Snake Count: six snakes, found on 4 different days between Aug. 31 and Sept. 6.

My remarkably calm wife, Amy, thankfully did not take the kids and move out, leaving me alone in the snake house. Although, I will have to accompany her on trips to basement for the foreseeable future (10 years, I'm guessing)

That’s all for this edition. I’ll be back in the Oct. 19 issue with another chapter in the Snake Hunters adventure series.