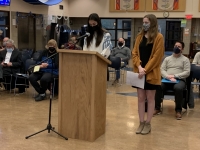 During its Jan. 11 Organizational Board Meeting, the Bay Village Board of Education swore in newly elected Board members Amy Huntley and Dr. Andrey Stojic, as well as retained Board member Dr. Scott Schulz. The oath was delivered by District Treasurer Meghan Rohde.

Upon completion of the swearing-in ceremony, the Board’s first matter of business was electing officers for the 2022 calendar year. Paul Vincent was voted President and Dr. Scott Schulz as Vice President.

“This year’s Board has such a vast array of skills, talent and experiences to bring to the table,” said President Vincent. “As a Board, we are all motivated to continue pursuing student-focused academic excellence for our learning community.”

Also on the Board agenda was recognition of our Board members since January is School Board Recognition Month. Bay High School seniors Milan Oppewall and Angelica Jameson read a proclamation issued by Gov. Mike DeWine in honor of Ohio’s school board members. Each of the two students also shared what she appreciates about Bay Village Schools, and personally thanked the Board for its service.

“One Rocket Nation is not only a community, but one big family,” said Angelica.

“Growing up with love and support trains us to give back,” said Milan. “So many kids have benefited from the work you do.”

Below are bios for the newly elected Board members.

Mrs. Amy Huntley, who was re-elected to the Board of Education in November after a 2-year hiatus, has held numerous roles on the Bay Village Board of Education throughout her service from 2002-2019. She has lived in Bay Village for 46 years and is a graduate of Bay High School. Mrs. Huntley has also served as PTA president for Normandy and Westerly, treasurer of five PTA units and treasurer of Bay Music Boosters. Her husband, Tom, is a retired Bay Village Schools teacher, all six of her children attended Bay Village Schools K-12, and soon, two of her grandchildren will enter the district. In addition to pursuing her passion for continuing the excellence of Bay Village Schools, she is a CPA and owner of Huntley & Co. LLC. Mrs. Huntley holds a B.A. in Business Administration from Baldwin Wallace University.

Dr. Scott Schulz was retained as a Board member in the November 2021 election. He was originally appointed to an open Board seat in November of 2020. Dr. Schulz is Vice President for Enrollment Management at Baldwin Wallace University, and has spent most of his professional career in post-secondary education. He has held positions at Pennsylvania State University, Saint Martin's University and the University of Southern California. Dr. Schulz volunteers with American Corporate Partners, helping to mentor military veterans. He is a graduate of the University of Arizona, with a Ph.D. in Higher Education and a B.A. in Communication. He and his wife, Ruth, have two daughters in the district – both at Bay Middle School. Dr. Schulz has served on the Finance and Policy committees, and the Purple Star Committee.

Dr. Andrey Stojic, who was elected to the Board in the November 2021 election, is a neurologist and epileptologist, and serves as the Associate Director of General and Regional Neurology in the Cleveland Clinic Neurological Institute. He received his B.A. in Biology at Wittenberg University and degree in Medicine and Ph.D. in Neurosciences at the University Of Toledo Medical Center. Dr. Stojic completed his medical internship at MetroHealth Medical Center, followed by residency training in neurology and epilepsy at the Cleveland Clinic. He and his wife, Kim, have three children – a 2017 Bay High School graduate, and students at both Bay High School and Bay Middle School.