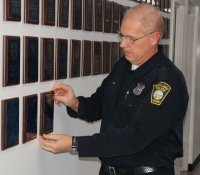 Westlake patrolman John Jereb hangs a plaque on the wall alongside the names of many other retired Westlake police officers.

Westlake Police patrolman John Jereb retired after 28 years of service to the people of Westlake. He received a proclamation from Mayor Dennis Clough during a send-off on Thursday, Jan. 6, attended by colleagues and family.

Police Chief Kevin Bielozer recounted Ptl. Jereb's multiple accomplishments over his career, including being named the Westlake Police Officer of the Year in 2003.

Chief Bielozer presented him a plaque and a display case containing the various badges Ptl. Jereb wore during his tenure as an officer.