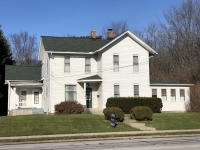 South elevation of the 1853 Clark and Huldah Smith House, 26904 Center Ridge Road. Photo by Will Krause

Clark Smith was the seventh child of Sylvanus Smith and Lydia (Clark) Smith. On March 9, 1827, he purchased 100 acres (less one-half acre reserved for a burying ground) for $500 from his father. This land was on the north side of Center Ridge, east of Dover Center Road. Between 1840 and 1850 he sold off some of the land in the emerging Dover Centre business area in three different transactions before building the house.

Sylvanus Smith was the original settler in Dover Centre. At one time he owned all of the land between Dover Center Road and Canterbury Road north of today’s Westwood Road and south of Dover Congregational Church.

Sylvanus Smith was the brother of Abner Smith. Abner Smith initially owned much of the land on the north side of Center Ridge Road west of Dover Center Road nearly to where the Westlake Recreation Center is today. Abner built the home at 27748 Center Ridge Road known as the 1820 house which currently is occupied by Bennett Family Dental.

Clark Smith may have been the twin of Job Smith and was born in about 1799 probably in Hawley, Massachusetts. He arrived in Dover with his father in 1818. He was married twice, the second time in 1839 to Huldah Miles. His five children were with his first wife, Olive (Hartson) Smith who died in 1838. Huldah lived until 1895. Clark was about 54 years old and Huldah 47 when they built this house. In 1859 the house was valued at $100. Records indicate that in 1859, 10 acres were plowed, 72 acres meadow and 10 acres wooded.

In 1875 the property was transferred to H.B. Smith (probably either Huldah or son Henry B.). Clark died in 1877. In 1906 the bulk of the property transferred to Betsey L. Smith. She subsequently sold a number of individual lots for houses along the east side of Dover Center Road where a number of fine homes were constructed in the early 20th century.

The Clark Smith home was listed on the Ohio Historic Inventory in 1977. It was described as a Vernacular farmhouse with Italianate features. At the time it was listed it had clapboard siding painted white with green trim which has since been covered in aluminum siding. The windows were described as tall and narrow double-hung windows with segmental arched moldings with flat shouldered architraves (decorative bands). There was even an oculus (a round window or decorative opening) in the front gable. The inventory form preparer noted that the porch with shed roof was probably added later and that there were one-story additions on the east and west elevations.

Most of the Italianate features have either been removed or covered over but a few trim details remain visible on the exterior. It is tantalizing to think what may lie beneath the aluminum siding. The inventory form also states that: “This house is one of about a dozen of Westlake’s oldest remaining homes.”

The four-bedroom, two-bathroom, 2,376 square foot home is currently for sale for $180,000. The online photographs show that much of the interior Italianate woodwork remains. It has been painted white except for the banister and newel post which appear a dark walnut color.

The current owner purchased the home in 1956. They approached the Westlake Historical Society in 1986 to research the history of the home but then declined purchasing a historic plaque after it was certified as a century home, constructed in 1853.

In 1986 it was noted that recent owners included Ruth E. Graff, then Alvin Van Gunten in 1951 and then the current owners.

The property can continue to be used as a residence. The current .39 acre lot is zoned general business. Section 1216.02(h) of the Westlake zoning code permits conversion of the house to office or other commercial uses with approval of a conditional use permit and a development plan. The difficulty is being able to provide parking on the small parcel. One possibility is acquiring additional commercially zoned land to the east of the existing parcel and assembling it to create a minimum 1-acre lot.

William R. Krause, AICP, retired as the Assistant Planning Director of the City of Westlake in 2020 after over 30 years with the city. He also served on the Bay Village Planning Commission for 5 years. He was a trustee for the Bay Village Historical Society from 2020 to 2021 and a former board member of the Westlake Historical Society. He was chair of their Lilly Weston Committee and was a member of the Reuben Osborn Learning Center Steering Committee. He is currently a Trustee of the Western Reserve Architectural Historians. He has been married to Debra for 40 years and is the father of three grown children, grandfather of six and co-owner of a Yellow Lab named Sadie.