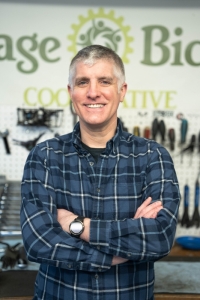 Members of the Bay Village Community Council met on Jan. 24 to review nominations and select this year's Citizen and Project of the Year. A committee of six people, themselves active volunteers in the community, unanimously voted to honor Patrick McGannon for his sustainability and bicycling safety efforts, and the Bay Village Historical Society's revitalization project, "Shining a New Light on the Past."

CITIZEN OF THE YEAR

Chances are, you know Patrick McGannon and may not even realize it.

If you’ve ridden your bicycle through Bay Village in the past decade, you know Patrick. If you’ve filled your water bottle at the Dwyer Center or one of the city’s parks, you know him. If you’re a member of the new composting collection site at Bay Lodge, if you’ve participated in a stream cleanup, if you fill your curbside recycling bin every week, Patrick’s volunteerism has affected you.

Patrick has spent most of his life in Bay Village, aside from four years earning a biology degree at John Carroll University and a few years working in Seattle. During the day, he is vice president of OneLink Technical Services, an IT firm in Westlake, but in his free time, Patrick devotes countless hours to volunteerism and advocacy.

His passion for sustainability and cycling fuels his efforts.

“I volunteer because I believe it is an important part of being in a community and it helps bring additional focus to critical issues that otherwise might not receive as much attention,” Patrick said. “If we don't address the habits that brought humanity to this tipping point of significantly accelerated climatic change and the polluting of our air, water, and soil, then current and future generations will suffer due to our inaction. It is the loving thing to do to think of how our actions negatively affect others and to then take corrective actions, both personally and at the policy level.”

Patrick was a charter member of the Bay Village Green Team when it launched in 2008. Originally started as a bunch of volunteers assembled by former Mayor Debbie Sutherland, the group branched out to become a standalone nonprofit organization in 2015. Patrick led the charge to acquire 501(c)(3) status and has served as the board president since then.

During his 13-plus years with BVGT, Patrick has worked with other volunteers to put in place many sustainability initiatives ranging from clean air and water, to waste reduction, to recycling and composting. He created a monthly waterways cleanup program, obtained a grant from the Cuyahoga Soil & Water Conservation District for kits to test the water quality in Bay’s creeks, worked with the City to switch to an automated trash and recycling service, created a survey to poll residents about composting and worked hand-in-hand with Rust Belt Riders to bring a collection site to Bay Lodge.

He also furthered the Green Team’s goal to reduce plastic bottle waste by installing water bottle filling stations in public areas. Patrick researched various models and site locations, resulting in the donation of filling stations in the Dwyer Center, City Hall, Cahoon Park, Bradley Road Park and Huntington Beach. The public’s embrace of these stations has encouraged the city to take the reins and continue outfitting public spaces with them.

Patrick was also a founding member of the Village Bicycle Cooperative in 2011 after Jennifer Smillie presented her idea of a nonprofit bicycle cooperative at a Green Team meeting, and he continues to serve on the board of that organization.

As a member of VBC, Patrick led the effort to donate and install “Share the Road” signs throughout the city to remind drivers that Ohio law affords bicycles the same rights to the road as motorized vehicles. He also spent a year doing a tremendous amount of behind-the-scenes work to help Bay Village City Council rewrite the city’s bicycling ordinances to match the state’s in 2014.

“Patrick is genuinely concerned about the environment and takes action in his personal life to foster a healthier living space for all of us,” his nominator wrote. “He walks the talk, or should I say he rides the talk as he rides his bike rather than take his car, either going to work or buying groceries. He is an example for all of us.”

PROJECT OF THE YEAR

The pandemic has reached into every corner of our lives, upending plans and requiring changes to standard procedures. Businesses, organizations and individuals have all had to adjust. Many have suffered, but some have found a silver lining in the new – and hopefully temporary – way of doing things.

One such group is the Bay Village Historical Society. When covid-19 rules mandated the closure of Rose Hill Museum and the Reuben Osborn Learning Center, volunteers decided to get to work. In 2020, BVHS began a complete inventory of the museum’s massive collection, leading to the discovery of hidden treasures and a reorganization of the museum.

Over the next year, more than 110 volunteer hours were logged every week. Some worked from home, others worked in pairs at Rose Hill – masked and socially distanced. By the end of 2021, more than 7,000 historical artifacts were entered into an archival software database, along with over 11,000 images of those items.

“I am so proud and grateful for all the individuals who have stepped forward to help and donated so much of their time to make this project as successful as it has been so far,” said Cathy Flament, Bay Village Historical Society president. “This has definitely been a group effort.”

Posters depicting the lineage of five early Bay Village (then Dover) families were installed. Accompanying the display are objects once owned by the Cahoons, Osborns, Saddlers, Aldriches and Wischmeyers.

Pedestal signs were installed in various rooms in Rose Hill with background information and a QR code directing visitors to a website with more historical information and an audio recording. The recordings are available at bayhistorical.com for those wishing to relive Bay’s past from the comfort of their homes.

Additional signage throughout the museum educates visitors about the significance of various items, which has been met with an overwhelmingly positive response. Four life-size cutouts of the Cahoon sisters that were fading with age after 20 years were copied onto plywood and painstakingly painted in color by volunteer Pamela Ebert.

Bay had one of the first Girl Scout troops in the country. A collaboration with Girl Scout Council resulted in a valuable mutual exchange of information and the creation of a new display at the museum.

The city repurposed an unused wooden mailbox and a volunteer painted it to replicate the Cahoon barn (now Community House) and turned it into a little free library, designated as the “Julia Osborn Scott Lending Library” after one of Bay’s first librarians.

School yearbooks from Parkside/Bay High were acquired and sent out to be digitally scanned. The books, from 1927 through 2016, are available for viewing on the historical society’s website.

The Cahoon Cabin in the Cahoon creek valley behind Rose Hill was finally reopened to the public in 2021 after being thoroughly cleaned, inventoried and reorganized.

The historical society’s current endeavor to share Bay’s past with present generations is a twice-monthly blog post highlighting an artifact from the collection and encouraging visitors to explore more. “Glimpse of the Past” can be viewed at bayhistorical.com/blog-entries.

To see a slice of Bay Village history in person, visit Rose Hill Museum and the Reuben Osborn Learning Center on Sundays, 2-4:30 p.m., beginning this April. Tours are also available by appointment; phone 216-386-5997.