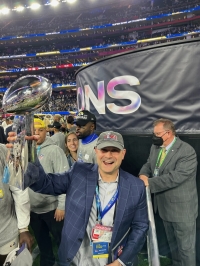 Congratulations to Bay High School alumnus and Super Bowl champion, Ted Monago, the assistant director of college scouting for the Los Angeles Rams. This 1987 Bay High School graduate got his football start right here in Bay Village, playing for the Rockets. He then went on to play football for Arizona State University as a walk-on athlete.

Monago, who comes from a family of seven children (six of whom graduated from Bay High School), says he was "an average athlete and normal student," but it was the community and school district that prepared him for success.

“We call it the ‘Bay Bubble’ because it’s a unique community,” Monago said. “Quality teachers, dedicated coaches and active parents were always around us, guiding us to become who we are today.”

After graduating from ASU, Monago received his master’s degree in educational administration from University of Idaho, and went on to coach at the College of William and Mary. He then joined the Chicago Bears as an area scout and executive scout, and was with that organization for more than 12 years. In 2013, this former Little League umpire joined the St. Louis Rams as a national scout. Three years later, the team became the Los Angeles Rams, and in 2017, the former Rocket was promoted to his current position.

“Going to Bay, you always knew you’d be prepared for college and be further ahead than most,” Monago said. “I still keep in touch with so many of my classmates, and stop by and visit the football team when I’m in town. Once a Rocket, always a Rocket!”