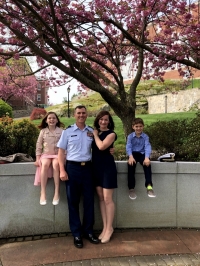 The Powers, a military-connected family within the Bay Village City School District, serve on the district's Purple Star Committee. Left to right: Madeline, Mike, Bernadette and Thomas Power. Madeline and Thomas are students at Bay Middle School and dad Mike is a Lieutenant in the U.S. Coast Guard. Photo courtesy Bay Village Schools

Bay Village Schools started the Purple Star initiative this school year under Interim Superintendent Char Shryock, who saw the need after personally meeting with stakeholders and realizing how many military-connected families live in Bay Village.

“I was surprised at the depth of experience we have within our many military-connected families, both active and retired,” said Shryock. “I am beyond pleased that our team was able to share with the Ohio Department of Education how important our military families are to our district. Earning this distinction for all four of our school buildings on our first attempt is beyond what I had hoped for.”

In November, the Bay Village Board of Education passed a Resolution in Support of Military-connected Children and Families. The district created a webpage for military families that provides resources and information, celebrated Veterans Day and Military Family Month in November with activities at each school and the mailing of care packages to alumni who are serving, and has been celebrating Month of the Military Child in April by sharing family photos on social media and during daily announcements within each building. These military-connected students will also be honored later this month with a special certificate and T-shirt to thank them for their own sacrifices.

Committee member Bernadette Power, a current parent with two students in the district, is appreciative for all the work Shryock has put into this initiative. Her family knows first-hand what it’s like to move from coast to coast for her husband Mike’s career as a Lieutenant in the U.S. Coast Guard.

“As a military family, we know how important community support and resources are when moving to a new area,” Power said. “Superintendent Shryock has worked tirelessly to bring this Purple Star designation to Bay Village Schools.”